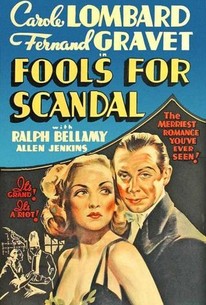 In her only Warner Bros. starring film, Carole Lombard plays a Hollywood movie actress who makes the park-bench acquaintance of an impoverished French marquis (Fernand Gravet). Hoping to coerce Carole into marriage, the nobleman poses as a butler and enters her household. His plan is to compromise Lombard and force her to make him an "honest man"--with the attendant cash settlement. Ralph Bellamy, as ever, is the poor clod who really loves Lombard but who loses her in the end to the chastened Gravet. Rodgers and Hart were commissioned to write several songs for this film, but found most of their efforts consigned to the cutting room floor. Fools for Scandal was based on Nancy Hamilton's stage play Return Engagement.

Critic Reviews for Fools for Scandal

There are no featured reviews for Fools for Scandal at this time.