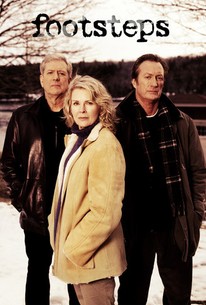 Adapted from an unproduced play by Ira Levin (Rosemary's Baby, et al.), the made-for-TV Footsteps stars Candice Bergen as Daisy Lowenthal, a best-selling suspense novelist who has recently "killed off" her most popular fictional character -- and who is recovering from a nervous breakdown. Determined to confront and conquer one of her most dreaded phobias, Daisy elects to spend a weekend alone at her isolated beach house, not even permitting her husband Robbie (Michael Murphy) to keep her company. As Daisy sweats out the weekend -- and an ominous storm -- she finds that she is not quite as alone as she thinks. For one, there's that curious young man named Spencer (Bug Hall), Daisy's self-proclaimed number one fan who possesses a disturbingly thorough knowledge of the writer's professional and personal life; for another, there's lawman Eddie Bruno (Bryan Brown), who has apparently been hired to keep tabs on Daisy. There's yet another player in this taut little melodrama...but to give any more away would be unthinkable. Footsteps debuted October 12, 2003, on CBS.

Rita Malik
as Lady in Audience

By-the-numbers, but first-rate Bergen, graduating before our eyes from fragility to sarcasm to resourcefulness.

There are no featured audience reviews yet. Click the link below to see what others say about Footsteps!