For a Few Dollars More (Per Qualche Dollaro in Più)1965 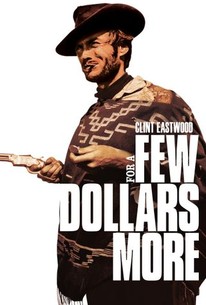 Critics Consensus: With Clint Eastwood in the lead, Ennio Morricone on the score, and Sergio Leone's stylish direction, For a Few Dollars More earns its recognition as a genre classic.

Critics Consensus: With Clint Eastwood in the lead, Ennio Morricone on the score, and Sergio Leone's stylish direction, For a Few Dollars More earns its recognition as a genre classic.

Critic Consensus: With Clint Eastwood in the lead, Ennio Morricone on the score, and Sergio Leone's stylish direction, For a Few Dollars More earns its recognition as a genre classic.

For a Few Dollars More (Per Qualche Dollaro in Più) Photos

This pulse-pounding follow-up to Sergio Leone's A Fistful of Dollars brings back Clint Eastwood as the serape-clad, cigar-chewing "Man With No Name." Engaged in an ongoing battle with bounty hunter Col. Douglas Mortimer (Lee Van Cleef), the Man joins forces with his enemy to capture homicidal bandit Indio (Gian Maria Volontè). Both the Eastwood and Van Cleef characters are given understandable motivations for their bloodletting tendencies, something that was lacking in A Fistful of Dollars. In both films, however, the violence is raw and uninhibited -- and in many ways, curiously poetic. Leone's tense, tight close-ups, pregnant pauses, and significant silences have since been absorbed into the standard spaghetti Western lexicon; likewise, Ennio Morricone's haunting musical score has been endlessly imitated and parodied. For a Few Dollars More was originally titled Per Qualche Dollaro in Più; it would be followed by the last and best of the Man with No Name trilogy, The Good, the Bad and the Ugly. ~ Hal Erickson, Rovi

Joseph Egger
as The Old Man

Binge Guide: 5 Things to Watch If You Love The Mandalorian
Mystery Science Theater 3000 and More on Netflix This Week

Doesn't have the narrative strength of the first in the trilogy but individual scenes are still brilliant and each ingredient in just perfect, cast, score, tone...

Leone's artful editing of close-ups to communicate the characters' spatial relationships is always a pleasure.

A hard-hitting western with upper-case values out of the busy Italo stable, this is a topnotch action entry.

A significant step forward from A Fistful of Dollars, with the usual terrific compositions, Morricone score, and taciturn performances, not to mention the ubiquitous flashback disease.

The fact that this film is constructed to endorse the exercise of murderers, to emphasize killer bravado and generate glee in frantic manifestations of death is, to my mind, a sharp indictment of it as so-called entertainment in this day.

Here is a gloriously greasy, sweaty, hairy, bloody and violent Western. It is delicious.

Cinema greatness! And to top it off, Leone has to have some of the most interesting and strange looking people populating his film that you'd swear Fellini loaned him a band of extras.

This Spaghetti Western masterpiece would only be bested by its own follow-up.

Lean, mean, atmospheric and blackly comic spaghetti western by the team who all but invented the genre, well deserving of its reputation as one of the era's very best.

Most fans pick The Good, The Bad, and The Ugly as the stand-out, but I really like this one best.

One of the best westerns around the sequel to a fistful of dollars. It has some great scenes and gun fights.

This second film of Leone's Dollar Trilogy is a significant step up compared to the previous one, as he starts to polish his stylish direction and is helped by a great cast to create some of the most unforgettable scenes in the Spaghetti Western subgenre.

"The man with no name" returns in this sequel to A Fistful of dollars in which he forms an uneasy alliance with another bounty hunter to kill the head of an outlaw gang while they hatch a scheme to rob the most heavily guarded bank in the territory. For A Few Dollars More is not considered the best of the series by many, but I personally prefer it to the (damn good) original at least. It feels far more like a true Leone film, is better paced and boasts not one but three commanding presences in the form of Clint, Lee Van Cleef's steely eyed and clinical assassin, and Gian Maria Volonte's sinister bandit. The interplay between the three is fantastic and there are many classic Leone moments including his trademark framing of weathered, characterful faces against epic landscapes. There is more depth to the story as the heist and undercover elements involve layers of deceit and betrayal leading to an extremely atmospheric finale. Add to that Ennio Morricone's score which is once again wonderfully memorable and you have all the ingredients for an all time classic western.

For a Few Dollars More (Per Qualche Dollaro in Più) Quotes