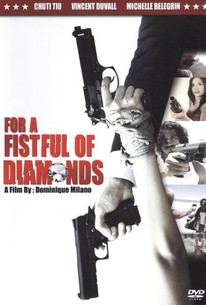 Director Dominique Milano draws inspiration from the spaghetti westerns of the 1960s and '70s for this upbeat action comedy about the race to find a missing briefcase full of diamonds. French gangster Dede Fratelini (Dominique Campion) is in Paris awaiting the arrival of his diamonds when he discovers they have simply disappeared somewhere in the vast Nevada desert. Little does Fratelini realize that his priceless rocks have fallen into hands of a convicted killer (Abdel-Aziz Essayed), who staged a daring escape while being transported to prison, and hijacked the courier's car in order to make a fast getaway. Later, the killer's plans are foiled by his scheming ex-girlfriend Tatiana (Chuti Tiu) and her new flame Buitre (Fabrice Sopoglian). With FBI Agent Franko Valle (Fabrice Vilder) hot on their trail, the couple races to outrun the law, and hold on to their windfall at all costs. Unfortunately for them, Agent Valle is closing in fast, and Fratelini isn't about to give up his diamonds without a fight.

Critic Reviews for For a Fistful of Diamonds

There are no critic reviews yet for For a Fistful of Diamonds. Keep checking Rotten Tomatoes for updates!

There are no featured reviews for For a Fistful of Diamonds at this time.

For a Fistful of Diamonds Quotes