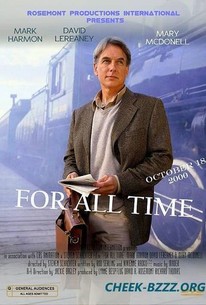 For All Time Photos

This made-for-TV fantasy was based on Rod Serling's "A Stop at Willoughby," a 1960 episode of Serling's classic anthology series Twilight Zone. The story begins in the year 2000, with advertising executive Charles Lattimer (Mark Harmon) escaping his hectic professional life and increasingly dissatisfying marriage to wife Kristen (Catherine Hicks) by obsessively tinkering with his elaborate model-train set. Through the aid of a magic stopwatch, Charles boards a real train and is whisked back to 1896, where he inaugurates a romance with attractive widow Laura Brown (Mary McDonnell). Traversing back and forth through the years, Charles ultimately finds that he will never truly be happy until he chooses between the "real" world and the world fashioned by his nostalgic imagination. Filmed in Alberta, For All Time made its CBS network debut on October 18, 2000.

Critic Reviews for For All Time

There are no critic reviews yet for For All Time. Keep checking Rotten Tomatoes for updates!

There are no featured reviews for For All Time at this time.

For All Time Quotes