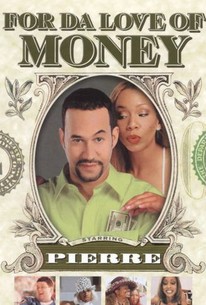 Comedian Pierre wrote, produced, directed, and starred in this urban comedy about a man who gets a fortune the easy way, but isn't sure how (or if) he should hold on to it. Dre Mitchell (Pierre) is a regular guy living in South Central Los Angeles; Dre is out of a job, and money has been tight for him recently. After the robbery of an armored car, thieves on the run from the cops stash 25,000 dollars in cash in Dre's backyard, and when Dre finds it, he's not sure if he should run out and spend his new fortune, or turn it in. Meanwhile, word spreads like wildfire through the neighborhood that Dre has come into some big money, and everyone he knows starts hitting him up for a few grand; normally, he isn't that interested in sharing the wealth, but when sultry Tasha (Sacha Kemp) is doing the asking, it's a lot harder to say no. For Da Love of Money marked Pierre's debut as a writer and director; the supporting cast includes Reynaldo Rey, Tanya Boyd, and a cameo from ventriloquist Willie Tyler and his wooden sidekick, Lester.

Ralphie May
as Otis

Tommy Franklin
as Too Sweet

Christopher Guyton
as Inmate No.1

Johnathan Gosick
as Inmate No.2

Bobby Peron
as Inmate No.3

Terry Boyd
as Inmate No.4

Robert Michael Moreno
as Cop No.1

David Maggard
as Cop No.2

Ivory Hunter
as Cop No.3

Curtis Arcexnul
as Patron No.1

Bobby Singfield
as Patron No.2

Danielle Hobbs
as Princess
View All

Critic Reviews for For da Love of Money

A mediocre sketch comedy film with amusing moments, but no substance nor purpose.

Audience Reviews for For da Love of Money

There are no featured audience reviews yet. Click the link below to see what others say about For da Love of Money!

For da Love of Money Quotes