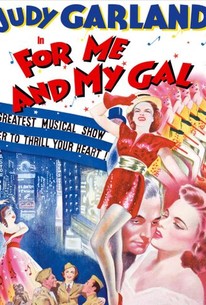 For Me and My Gal Photos

For Me and My Gal, a leisurely period musical, represents the first on-screen dancing of MGM's new star Gene Kelly. Judy Garland plays a member of a vaudeville troupe consisting of herself, George Murphy, Ben Blue and Lucille Norman. She leaves the act to join up with Kelly, who promises to propel her to the big time. Two unsuccessful years later, Garland and Kelly are still struggling in the small time, while Murphy and his bunch are headliners. Kelly nearly throws Garland over for singer Marta Eggerth, but Judy remains loyal--at least until Kelly deliberately breaks his hand to avoid serving in World War I. Having lost her brother Richard Quine to the war, Garland denounces Kelly as a coward and walks out. Kelly redeems himself by joining an overseas entertainment troupe, saving several lives when he finds himself under attack on the front. Judy and Gene are at last reunited in Paris. A major break for both Gene Kelly and Judy Garland (who proved once and for all in this film that she was no longer just a "juvenile"), For Me and My Gal was based on a story by Howard Emmett Rogers.

Critic Reviews for For Me and My Gal

...has real affection for the vaudeville world it depicts.

Transcending the vortex of bulldozing patriotism are Kelly and Garland, harmonizing musically and emotionally

A nostalgic homage to vaudeville during the pre-WWI period that is no better than a routine musical.

Gene and Judy are inspired casting in this early MGM musical.

Audience Reviews for For Me and My Gal

A little hoky but Judy and Gene make a good team.

this movie would've been so much more amazing with color. gene kelly gives a respectable - but not stunning - debut as a pretty unlikeable character brimming with infectious charm. judy garland is...okay. sometimes she doesn't give eye contact and it's kind of unsettling to see her close-up sometimes. but all in all, it's fun and i love that "me and my gal" song!

For Me and My Gal Quotes