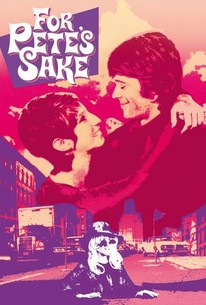 Barbra Streisand returns to the screwball-comedy milieu of What's Up Doc? in the lightweight For Pete's Sake. As a Brooklyn hausfrau named Henry (!), our heroine will do anything to help her cabdriver husband Pete (Michael Sarrazin) get ahead. When Pete begins to play the stock market, Henry borrows three grand from a loan shark, thereby setting off a series of comic catastrophes. Molly Picon is perfection itself as a money-savvy madam who holds the key to Pete and Henry's happiness and well-being. For Pete's Sake was originally titled July Pork Bellies, a curious cognomen that makes perfect sense within the context of the plotline.

Wil Albert
as Cop In Drag

Bella Bruck
as Lady In Supermarket

Martin Erlichman
as Man in Theater
View All

Critic Reviews for For Pete's Sake

What's up Doc?, though no masterpiece, runs rings around this perspiring imitation.

If it never soars, at least it hums along with a cheery, sloppy abundance of goodwill.

Audience Reviews for For Pete's Sake

Babs is always worth watching but this is definitely one of her lesser films.