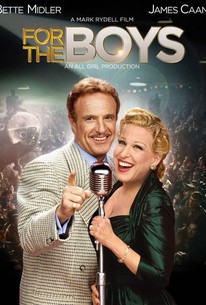 For the Boys Photos

Old wounds are opened on the eve of an awards presentation when it is discovered that the two recipients of the lifetime achievement award, singer/entertainer Dixie Leonard (Bette Midler) and comedian Eddie Sparks (James Caan) refuse to appear together. The film goes on to chronicle the past triumphs and conflicts of the two former USO performers as they appeared together overseas during World War II, the Korean Conflict and the Vietnam War.

Andy Lauer
as Corpsman on Battlefield

Andrew Lauer
as Corpsman on Battlefield

Marc Poppel
as Corpsman at MASH

Gabe Bologna
as Marine at MASH

Tony Pierce
as Major at Firebase

Garrison Singer
as Commander at Citadel

Critic Reviews for For the Boys

For a big, glitzy Hollywood entertainment, Rydell's movie opens a surprising number of wounds, and warns us to suspect the very glamour it revels in. It's no small accomplishment.

This movie is cold and distant when it isn't contrived, and by the end not even the manufactured emotions ring true.

Never a subtle director, Rydell goes for the obvious and sentimental. Starring Bette Midler and James Caan. his musical chronicle is not so much nostalgic as it is banal, reducing major events in American history to the level of personal feuds.

Hokey and sentimental, but Midler's divine.

There are moments when you might find yourself moved beyond reasonable expectation.

Audience Reviews for For the Boys

Nothing is convincing in this film, from the awkward and sudden tonal shifts to the cheap production values to the unintentionally hilarious performances . . . out of all the times James Caan has been miscast in a movie, this has to be one of the worst.

Good story but a bit of miscasting knocks this one off center and off the mark.

bette's great, the movie not so much

For the Boys Quotes