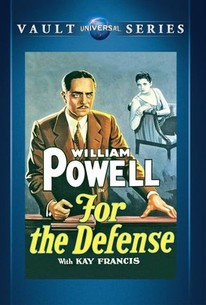 For the Defense Photos

William Powell stars in this drama as William Foster, a gifted defense attorney with a gift for making cases go his way. Foster's winning record in the courtroom has earned him a colorful clientele, including several notorious criminals, but he doubts his abilities when his girlfriend Irene Manners (Kay Francis) is charged with manslaughter after a violent incident which occurred while she was drinking. Wanting to protect Irene, Foster tries to pull a few strings, but the results find Foster facing a five year sentence for jury tampering. While Foster certainly doesn't want to be separated from the woman he loves, he also knows that in prison he'll have to face several former clients whose defense didn't pan out. For The Defense was based in part on the true story of William Fallon, a well-known attorney of the day. ~ Mark Deming, Rovi

Critic Reviews for For the Defense

A great film? No, but it's a well made, fast-moving drama with some terrific performances that makes it worth a look.

There are no featured reviews for For the Defense at this time.

For the Defense Quotes