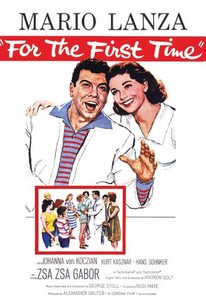 This was popular tenor Mario Lanza's last film before he died in Rome of a heart attack at the age of thirty-eight. The story follows the career and love interest of opera star Tonio Costa (Lanza), who is careless in regard to his professional engagements. Being more than a little irresponsible, he is his own worst enemy when it comes to his singing future. That is true until he meets a deaf woman, Christa (Johanna von Koczian), and falls in love with her. She turns his life around, as he dedicates himself to performing all he can in order to raise the needed funds to help her to hear again. Several highlights from well-known operas are included in the performance segments of the story, showing to full effect Lanza's stunning tenor voice. First thrown into the spotlight in the 1958 film The Student Prince, Lanza's performance in films got him unjustly banned from the stage at the Metropolitan Opera.

Sandro Giglio
as Alessandro
View All

Critic Reviews for For the First Time

There are no critic reviews yet for For the First Time. Keep checking Rotten Tomatoes for updates!

Audience Reviews for For the First Time

Lanza's last film is an enjoyable lightweight concoction with some lovely scenery and the star in glorious voice. He performs many songs and as usual those are the strongest parts of the film since Mario was more of a personality than an actor but his part doesn't demand too much of him and he does fine with it. While Lanza sounds wonderful he's not looking his best, probably a result of his hard living ways which of course resulted in his passing shortly after the completion of this film. Someone who is a knockout is Zsa Zsa Gabor, her part is small but she perks up the picture every time she sweeps onto the screen beautifully dressed and oozing a sophistication that would be hard to find today.

For the First Time Quotes