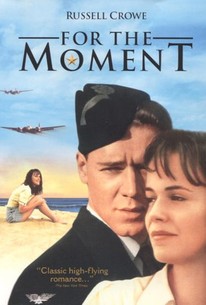 For the Moment Photos

This Canadian film presents and old-fashioned war time romance. It is set during 1942 in Manitoba and traces the doomed affair between a young farmer's wife whose husband is fighting abroad and a dashing Australian pilot. The pilot has come to train in the British Commonwealth Air Training Plan of Canada. When the pilot, Lachlan, is not training, he is surreptitiously wooing Lill, the farmer's wife. At the other end of town, Betsy who supports her two kids by bootlegging, charges for her services. She gets involved with Zeek, an American flight instructor.

Curtis Sali
as Dipper's Cronie No. 1

Sean Bowie
as Dipper's Cronie No. 2

Alistair Abell
as Airman No. 1

Critic Reviews for For the Moment

Audience Reviews for For the Moment

I have to watch this movie every time it shows up on our TV. The story is interesting - dealing with life, love and death in a World War II pilot training school in my backyard. The movie was filmed in Manitoba - and I recognize most of the scenery. I love Pachebel's Canon which is featured in the movie. Russell Crowe is pretty good as a young leading man.

For the Moment Quotes