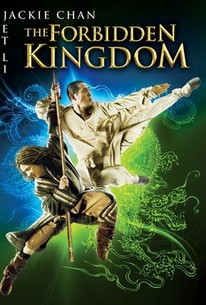 Critics Consensus: This hotly-anticipated pairing of martial arts legends Jackie Chan and Jet Li features dazzling fight scenes but is weighed down by too much filler.

Critics Consensus: This hotly-anticipated pairing of martial arts legends Jackie Chan and Jet Li features dazzling fight scenes but is weighed down by too much filler.

Critic Consensus: This hotly-anticipated pairing of martial arts legends Jackie Chan and Jet Li features dazzling fight scenes but is weighed down by too much filler.

Legendary martial arts stars Jackie Chan and Jet Li come together onscreen for the first time ever in director Rob Minkoff's time-traveling take on the Monkey King fable that finds an American teen transported back to ancient China after wandering into a pawn shop and discovering the king's fighting stick. Once there, the adventurous teen joins an army of fierce warriors who have sworn to free their imprisoned king at all costs. In addition to appearing as the mythical Monkey King, Li assumes the role of a silent monk, and Chan appears in the role of kung fu master Lu Yan. Famed action choreographer Yuen Woo Ping presides over the fight sequences. ~ Jason Buchanan, Rovi

Shen Shou He
as Farmer

Matthew Tang
as Jade Officer No. 1

Alan Ng
as Jade Officer No. 3

Yang Jun
as Herald No. 1

Jeffrey Kung
as Herald No. 2

Rui Li
as Cult Killer No. 2

Zhen Zhang
as Young Monk No. 2

Matthew Grant
as Paramedic
View All

Critic Reviews for The Forbidden Kingdom

One of the more entertaining movies we've seen in recent months.

Every time the focus switches to Michael Angarano channeling his inner Ralph Macchio, The Forbidden Kingdom reminds you that it's primarily an act of occidental tourism.

It might take a Zen master to explain exactly what audience this is aimed at.

It's difficult to resist, especially if you're a 12-year-old boy whose parents won't let you rent Once Upon a Time in China or the Kill Bill movies.

When Chan and Li match wits, each celebrates the other's presence. This isn't just a martial-arts display; it's generosity and camaraderie in motion.

Thanks to the two stars' disparate styles - the laser-like focus of Li and the whirlwind whimsy of Chan - The Forbidden Kingdom makes up for its flaws with plenty of eye-popping moments.

Why would a Jet Li/Jackie Chan picture actually star a scrawny American boy instead?

The Forbidden Kingdom spins a web of fantasy and enchantment. A gift for the ages. A timeless classic. A masterpiece. Pure Oscar gold.

Is this Hollywood championing relativism, or is it just lazy writing?

Nothing quite like the entertainment value of bloodless mayhem.

... has fun with the tale and Americanizes the genre without losing the pleasures of its Asian inspirations.

Surprisingly a lot of fun, with a simple good vs. evil plot, nice action sequences and a battle of the ages between two of the biggest martial art movie masters.

Audience Reviews for The Forbidden Kingdom

An American kung fu movie geek is entrusted with an ancient staff which transports him to a magical world where the mystical kung fu characters of his movies are real. The Forbidden Kingdom is a throwback to the wish fulfilment fantasies of the 1980s, sharing a lot in common with the likes of The Karate Kid, Big Trouble In Little China and even Indiana Jones. Making the hero of the film an American will no doubt irritate many and he is certainly the least interesting character in the film, but he is for the most part a figure of fun in the same way as Jack Burton was in Big Trouble. Jet Li strikes up a great buddy partnership with Jackie Chan who revives his Drunken Master routine, and their face off is impressive as you'd expect. And having grown up on cheesy 70s TV show Monkey, I'd have to say that he makes a brilliant Monkey King; I'd go as far as to say that I'd love to see a film version with him in the role. I would have to say that it is inevitably very formulaic and Yefei Liu's superfluous character only seems to be there to make sure that there's an even distribution of hotties. As a whole it's a funny, exciting family friendly fantasy with a knockabout charm that is clearly pandering to the Pirates Of The Shaolin crowd. But it works. Corny in an almost pleasing way and probably the best thing Jackie Chan has done since he first started bending over for the Hollywood buck, hating this film for the "homogenization of Chinese culture" is basically like calling Mr. Miyagi an evil traitorous sell out. Completely missing the point.

There are kid movies, and then there are kid movies, and this is one of the good ones. Make no mistake, Jackie Chan and Jet Li are the reasons to see this (doh!), their choreographic dramas flights of sheer acrobatic fantasy. I was smiling despite my years of superior cynical removal, a kid again, wishing I could do that. There's bad writing, sure, and you will groan out loud at some. But most every conversation leads to a fight scene so ... Some magic.

Hmmmm the usual curious mystic Honk Kong phooey chop sockey spiritual action flick based in the Orient. What can I say...it looks lovely with beautiful green vistas and magical splashes of light and sorcery...but the story is the usual weird and wonderful mess which is kinda unoriginal and boring. Its the usual wizards, martial arts, magic and evil henchmen by the numbers haha The heroes (Jackie and Jet) train and make a martial arts expert outta of useless 80's lookin American kid who somehow travels to another world of mystic wizards and monkey kings and of course..manages to save it no worries, surprise surprise hehe. There's nothing special here a tall really, its all been seen before and is rather cliched. Chan and Li are good together for sure but they need to do something more original.

A decent martial arts flick int he tradition of the old Crouching Tiger feel, Li and Chan have both done better but this was not bad.