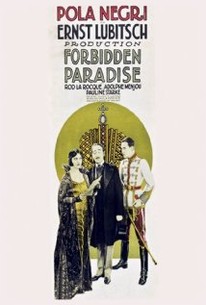 Star Pola Negri and director Ernst Lubitsch, who created an international sensation with the German superproduction DuBarry, Woman of Passion, were reunited in the frothy Hollywood comedy/drama Forbidden Paradise. Negri is cast as Catherine, the Czarina of an unnamed but very Russian-looking country. Rescued from revolutionaries by dashing Captain Alexis Czerny (Rod LaRocque), Catherine "repays" the Captain in the boudoir. Czerny falls madly in love with the Czarina, only to discover that he is the latest in a long line of royal consorts. Angrily, he joins the rebellion, vowing to topple the monarchy (but promising that Catherine will remain unharmed). When the revolution fails, Czerny is sentenced to death, but Catherine rescinds the order and allows him a happily-ever-after with his true love, lady-in-waiting Anna (Pauline Starke). Adolphe Menjou, a favorite of Lubitsch's, has all the film's best scenes as a rakish chancellor. Based on a play by Lajos Biro and Melchoir Lengyel, Forbidden Paradise was remade in 1945 as A Royal Scandal, with Tallulah Bankhead as Catherine; the 1945 film was produced by Ernst Lubitsch, who fell ill during shooting and was forced to relinquish the directorial responsibilities to Otto Preminger. ~ Hal Erickson, Rovi

Pola Negri
as Catherine, the Czarina

Madame Daumery
as Lady In Waiting

Pauline Starke
as Anna
View All

Too often the cinema presents us with a picture of attractive moral laxity, and tags a text at the end. There is no text to Forbidden Paradise, nor was any necessary, for the laxity it shows is not attractive, though depicted with fine wit.

There are no featured reviews for Forbidden Paradise at this time.