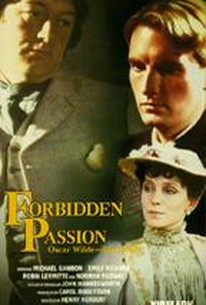 Michael Gambon stars as playwright/raconteur Oscar Wilde in this British TV film. As in earlier Wilde biopics, this version preoccupies itself with the homosexuality scandal involving Lord Alfred Douglas (Robin Lermitte) and his lordship's political powerful father, the Marquis of Queensbury (Norman Rodway). Arrested for corrupting Lord Douglas' morals, Wilde spends a debilitating 5 years in Reading Gaol, emerging a shattered shell of his former self. Not unexpectedly, the film is at its liveliest when depicting the flamboyant pre-prison Wilde, played with elan by Shakespearean actor Gambon. The knowledgeable teleplay for Forbidden Passion: Oscar Wilde the Movie was written by John Hawresworth; the musical score was by Carl Davis, best known for his orchestrations on behalf of film historian Kevin Brownlow's silent-movie restorations. ~ Hal Erickson, Rovi

There are no critic reviews yet for Forbidden Passion - Oscar Wilde the Movie. Keep checking Rotten Tomatoes for updates!

There are no featured audience reviews yet. Click the link below to see what others say about Forbidden Passion - Oscar Wilde the Movie!