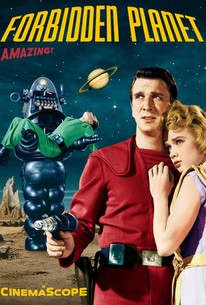 Critics Consensus: Shakespeare gets the deluxe space treatment in Forbidden Planet, an adaptation of The Tempest with impressive sets and seamless special effects.

Critics Consensus: Shakespeare gets the deluxe space treatment in Forbidden Planet, an adaptation of The Tempest with impressive sets and seamless special effects.

Critic Consensus: Shakespeare gets the deluxe space treatment in Forbidden Planet, an adaptation of The Tempest with impressive sets and seamless special effects.

In the 23rd century, Cmdr. J. J. Adams guides a rescue mission to faraway planet Altair-4. Twenty years earlier, Earth ship Bellerophon disappeared while en route to Altair-4. Only the ship's philologist Dr. Morbius survived; in the intervening decades, Morbius has created an Edenlike world of his own.

Frankie Darro
as Robby the Robot

Les Tremayne
as Narrator
View All

Imaginative gadgets galore, plus plenty of suspense and thrills, make the production a top offering in the space travel category.

Offers some of the most amusing creatures conceived since the Keystone cops.

An ingenious script, excellent special effects and photography, and superior acting, make it an endearing winner.

"Aladdin's lamp in a physics laboratory!"

The final revelations are grand, yet they take far too long to arrive.

The film takes its time to expose, or discover, the real heart of the matter, to fully present its cards, something that would become a role model in future films of the genre. [Full Review in Spanish]

Forbidden Planet (1956) is one of the more influential, classic and ground-breaking science-fiction space-opera adventures ever made - it was the first science-fiction film in color and CinemaScope.

No wonder so many sci-fi writers have cited it as an inspiration, I can see how this film would spark a lot of imagination back then, or even now. Great stuff.

Long before Star Trek, and truth be told, actually better made than ALL of them, comes this opportunity to cinematically philosophize about the frailty of the human condition while wearing color coordinated jumpsuits, holding a ray gun in one hand and some scientist's half-naked daughter in the other, while backed by weird electronic noise (naturally) - or Manifest Destiny in Deep Space. Good times.

Given that this film is over 50 years old, I can forgive many aspects of it (such as dialogue, special effects, visual effects, etc) that would cause many people to regard this as a complete turkey in the vein of Edward D. Wood, Jr. However, the cheesiness and dated aspects of this film actually become more beneficial to the film's impact and importance by adding to the campy factor and nostalgia, and by also showing just how much progression has been made in the field of film making. Another great highlight is seeing a very young, well, younger Leslie Nielsen in a somewhat serious role-a real treat. The best sci-fi film of the 1950's, and one of the most influential sci-fi pictures ever.

Come for the awesome production design, stay for a young Leslie Nielsen and Robbie the Robot!