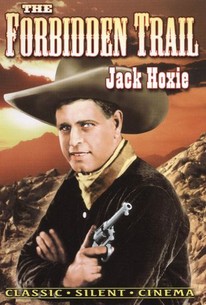 Silent screen star Jack Hoxie headlines this oater from 1923. As the tale opens, tragedy strikes: a ruthless band of outlaws, led by the vicious Red Dugan, ambushes a wagon train driven by impoverished settlers. Calvary Colonel Jim Merriwell attempts to save the day, but meets his fate from Dugan's bullets; Red then promptly kidnaps the survivors of his ambush, including Isobel, an infant child. The story jumps ahead fifteen years, when Jim Merriwell's son, Jack (Hoxie) learns of the events that precipitates his father's death, and sets out to avenge the original crime; in the process, he falls in love with Isobel, now a teenager well on her way to womanhood, who has been raised by the evil Red.

There are no critic reviews yet for Forbidden Trail. Keep checking Rotten Tomatoes for updates!

There are no featured reviews for Forbidden Trail at this time.