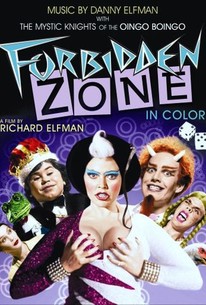 Noted contemporary composer Danny Elfman and his band Oingo Boingo make their feature film debut in this off-beat musical fantasy that chronicles the adventures King Fausto, the dwarf king of the bizarre Sixth Dimension, a land only accessible from the outside through a giant intestine leading from Hercules' mansion. The King and his debauched queen spend much time engaged in various forms of intercourse with a weird assortment of creatures including monsters, bikini clad babes, robots, and more.

If viewers can make it through the opening scene, it's safe to say they'll be prepared for the appalling singularities that follow.

It's frequently offensive and never clever, but it remains a unique and strangely magical movie.

Uneven, to put it mildly, but audacious in its daring to be different.

You could toss definitions at this thing all day and never hit the bullseye.

If awards were given for sheer insane spectacle, this avant garde 1980 cult flick would certainly qualify as among the most gold-bedecked movies of the past quarter century.

A much better cult classic than "Rocky Horror"

As wild a concoction of deliberately politically incorrect outrageousness as can be imagined - a love-it-or-hate-it proposition if ever there was one.

One by one, a cartoonish family is sucked into the 6th Dimension (ruled by king Herve Villachez and queen Susan Tyrell) in this cult musical comedy. Wild, weird and utterly unique, like a mixture of Jean Cocteau, the Three Stooges, and Betty Boop cartoons, with Busby Berkley-style choreography and music by Oingo Boingo.

A fantastically eclectic crazy musical, and I love it.

'Forbidden Zone': Don't Say You Weren't Warned! Yikes! What netherworld of dementia did I just land in? Imaginative, outlandish, kitschy, purile, grotesque cult film fodder. Worth a look so you can decide for yourself how to finish the sentence, "So bad it's...."

The best things in this move were the songs. It was okay, but I wouldn't watch it again.