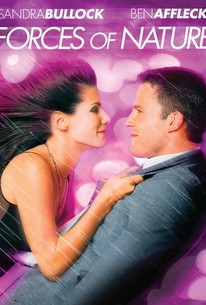 Critics Consensus: A distinct lack of chemistry between Ben Affleck and Sandra Bullock, coupled with a screwball sensibility that's a touch too screwy, scupper Forces of Nature's modest ambition to serve up romantic charm.

Critics Consensus: A distinct lack of chemistry between Ben Affleck and Sandra Bullock, coupled with a screwball sensibility that's a touch too screwy, scupper Forces of Nature's modest ambition to serve up romantic charm.

Critic Consensus: A distinct lack of chemistry between Ben Affleck and Sandra Bullock, coupled with a screwball sensibility that's a touch too screwy, scupper Forces of Nature's modest ambition to serve up romantic charm.

Ben has to get from New York to Savannah for his wedding to Bridget. He has everything under control until an eccentric young woman named Sarah literally falls into his life... and atmospheric conditions become decidedly unstable. Despite being detained, derailed and disrobed, panic doesn't really set in until Ben realizes that he's developing a definite attraction to the sexy and impetuous Sarah... and the feeling is decidedly mutual. It seems that man, machine and the forces of nature are conspiring to keep Ben from his vows, leaving him to wonder if this is some kind of cosmic test... and if it is, will he pass?

Carter Reedy
as Groomsman No. 1

Rafiki Smith
as Groomsman No. 2

Franklin H.D. Ecker
as Groomsman No. 3

Cordell Nichols
as Child on Train

Dan Biggers
as Justice of the Peace

Shannon Welles
as Lady in Wheelchair

Jacki Wilson
as Sunseeker
View All

Critic Reviews for Forces of Nature

An extremely enjoyable neo-screwball comedy about attractive opposites on the road.

The cinematic equivalent of Styrofoam: a weightless romantic comedy of synthetic feelings.

A most pleasant and diverting venture.

Dharma and Greg for anyone who thinks laughs in a can are what more movies need.

Make no mistake: This slackly paced picture doesn't gel. But it so consistently undermines the pastel-pretty conventions that currently rule the genre that some sneaky admiration is in order.

The humour is genial and both Affleck and Bullock are easy on the eye, but the film itself ends up being little more than a storm in a teacup.

Bullock seems a bit too level-headed for a screwball, and the affable Affleck has no real chemistry with her or Tierney.

While far from a complete misfire, Forces of Nature remains simply too by-the-numbers to be particularly gratifying or worthwhile.

All in all, it really depends on if you're a fan of the two leads. I am, so I liked it.

Audience Reviews for Forces of Nature

Opposites take a forced road trip together (hey, that's the plot to It Happened One Night!) ... will they or won't they fall in love? The idea is here, but the chemistry isn't, though not for lack of trying. Affleck plays the "normal but boring" everyman and Bullock is the kook/free spirit who teaches him about living life. Close, but no cigar.

For some reason the end of the nineties prompted these bleak, dumpy romantic dramas with fast editing and blue tint cinematography. This film did it, "Life Less Ordinary" did it, and every mediocre romantic dramedy did it as well. Even casting likeable Sandra Bullock and the ever popular Ben Affleck couldn't save this movie, probably because their chemistry sucks. Their characters are one note, Bullock is the definition of "manic pixie dream girl" in this case, only serving as a plot device rather than a fully fleshed out character. Her lies and grandiose sense of adventure don't make her anything but a flat nothing of a character. This film is melodramatic, it meanders along at a really slow pace, and throws a lot at the audience all at once without explanation. The director is obviously trying to make a point about how commitment isn't a death sentence and love is forever, but she bogs us down in exposition and pandering, to the point where it's alienating. There's just nothing easy or entertaining about this film.

A little known rom-com starring Sandra Bullock. A guy traveling to get married meets a free-spirited woman en route who helps open his eyes to life and love. It was a fun film with some funny moments with a good cast. Good soundtrack to!

The path to true love gets rocky in this engaging and occasionally wild tale - outragous and warmhearted funny. Ben Affleck and Sandra Bullock are very appealing as the reliable groom-to-be and free-spirited traveller who complement each other's strengths and weaknesses and who learn to offer one another valuable life lessons. The cinematography is unique, inventive, and beautiful! This movie has always given me a better perspective on marriage, love, lust, wondering minds, and people in general. This film's directorial vision is clear and is visually stunning. One good performance came from the late David Strickland (TV series' Suddenly Susan) in his final film role. It was unfortunate to hear about Strickland's death because his role in this film showed the world that he can act well on the big screen.