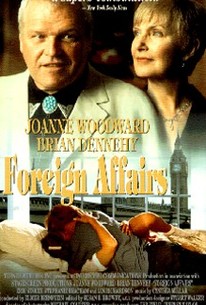 Foreign Affairs was adapted from the Pulitzer Prize-winning novel by Alison Lurie. Joanne Woodward plays Vinnie Miner, a college professor on sabbatical in England. While still on the plane, Vinnie makes the acquaintance of hard-hat tourist Chuck Mumpson (Brian Dennehy). Though she isn't too fond of Chuck's coarse, vulgar behavior, she finds him somehow fascinating. Likewise, Chuck is turned off by Vinnie's nose-in-the-air sophistication, but he's turned on by her. By the time the two of them have hit London, their mutual attraction has blossomed into love--much to the horror of their respective friends and family. Eric Stolz, Stephanie Beacham and Ian Richardson co-star in this made-for-cable confection, which first aired March 17, 1993, over the TNT channel.

The main tale is one of love and redemption, with a silvery hue. So what if the young kids get upstaged by a couple of old pros?

There are no featured reviews for Foreign Affairs at this time.