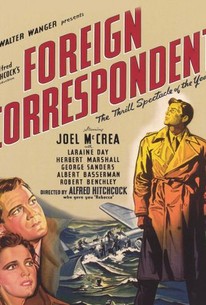 Fourteen scriptwriters spent five years toiling over a movie adaptation of war correspondent Vincent Sheehan's Personal History before producer Walter Wanger brought the property to the screen as Foreign Correspondent. What emerged was approximately 2 parts Sheehan and 8 parts director Alfred Hitchcock--and what's wrong with that? Joel McCrea stars as an American journalist sent by his newspaper to cover the volatile war scene in Europe in the years 1938 to 1940. He has barely arrived in Holland before he witnesses the assassination of Dutch diplomat Albert Basserman: at least, that's what he thinks he sees. McCrea makes the acquaintance of peace-activist Herbert Marshall, his like-minded daughter Laraine Day, and cheeky British secret agent George Sanders. A wild chase through the streets of Amsterdam, with McCrea dodging bullets, leads to the classic "alternating windmills" scene, which tips Our Hero to the existence of a formidable subversive organization. McCrea returns to England, where he nearly falls victim to the machinations of jovial hired-killer Edmund Gwenn. The leader of the spy ring is revealed during the climactic plane-crash sequence--which, like the aforementioned windmill scene, is a cinematic tour de force for director Hitchcock and cinematographer Rudolph Mate. Producer Wanger kept abreast of breaking news events all through the filming of Foreign Correspondent, enabling him to keep the picture as "hot" as possible: the final scene, with McCrea broadcasting to a "sleeping" America from London while Nazi bombs drop all around him, was filmed only a short time after the actual London blitz. The script was co-written by Robert Benchley, who has a wonderful supporting role as an eternally tippling newsman. Foreign Correspondent was Alfred Hitchcock's second American film, and remained one of his (and his fans') personal favorites.

Emory Parnell
as John Martin, Captain of the Mohican

Horace B. Carpenter
as Bit part

George B. French
as Bit part

Ian Wolfe
as Stiles the Butler

Alfred Hitchcock
as Man with Newspaper

Wheaton Chambers
as Committeeman
View All

Heavy-handed but still poignant patriotism in this Hitchcock thriller.

It's such an entertaining film that it's almost possible to forget its didactic agenda, which is certainly part of the point.

This film contains one of Hitchcock's most famous set pieces -- an assassination in the rain -- but otherwise remains a second-rate effort, as immensely enjoyable as it is.

Story is essentially the old cops-and-robbers. But it has been set in a background of international political intrigue of the largest order.

Into it Director Alfred Hitchcock, whose unmistakable stamp the picture bears, has packed about as much romantic action, melodramatic hullabaloo, comical diversion and illusion of momentous consequence as the liveliest imagination could conceive.

Hitchcock's espionage thriller is a thoroughly enjoyable affair, complete with some of his most memorable set pieces.

Though suffering from the effect of too many cooks in the writing kitchen, it's a title as filled with plot twists as it is wit, as well as Hitchcock's signature elaborate set pieces.

The plot's twists and turns are cleverly and wittily maintained, and the supporting cast is impeccably chosen...

One of two films directed by Hitchcock in 1940, Foreign Correspondent was just the beginning of his rise in American cinema.

A two-hour demonstration of what movies can be, and so rarely are.

Amusing enough, with a great cinematography and memorable set pieces, this is a passable film even with those irritating flaws that have become now the worst types of clichés, like a forced romance and how no one believes the main character and thinks he is crazy for no reason.

It's fascinating watching war time dramas made during that particular war time, especially when it's from the 40s. Hitchcock once again delivers with this thrilling war story about an American journalist on assignment in Europe who stumbles upon a scoop that could really be THE story that cements his career. That particular scoop happens to be a group of spies humorously fronting as a pacifist organization. I think the structure and pacing could have been reworked, as a pivotal assassination scene happens fairly early, when I felt it should have happened at the midpoint. And, for a two hour film, it does feel a little long and disjointed. However, the film is still engaging enough that this is not a major flaw, and more of a personal nitpick. The two leads aren't the most compelling, for a Hitch film or otherwise, but they could probably be worse, and seem to be at least trying their best. Where the film really shines is in the other stuff, like the typically strong direction, the wonderful cinematography, and some impressive setpieces like the aforementioned assassination scene set amongst a sea of umbrellas, the super taut creeping around the windmill scene, and the awesome plane sequence. It's all some great stuff, you know, typical Hitch, but it's worth seeing. Really solid, pretty fun, and something you should check out, despite the flaws.

If it wasn't for the corny propaganda... But anyway a great little thiller with some impressive set pieces. Hitchcock didn't need an overly constructed plot to make it work, injecting his finesse and humour at every step. Current action/adventure filmmakers should take note of this fine example of escapist cinema.

Alfred Hitchcock's tale of foreign intrigue and reversible windmills centers around John Jones (Joel McCrea), a maverick crime reporter whose editor feels he would be perfect to cover the burgeoning rumours of war echoing around Europe (for, he reasons, what is happening in Europe if not a crime?). Jones fits the image of the loud-mouthed American to a tee, sticking his foot into it at every wrong opportunity, but, having been a crime reporter, he knows a frame up when he sees one. Arriving in Europe, he first attends a luncheon for the Dutch diplomat Van Meer (Albert Bassermann), who is to give a speech for the Universal Peace Party (which is headed by a man named Fisher and his daughter, Carol). Later, when Van Meer is very publicly shot, Jones and the daughter team up with fellow reporter ffoliott (George Sanders) to chase down the assassin. There are some very suspenseful set pieces in the film, one of which takes place in a windmill, and another onboard a transcontinental flight. Both could be considered Hitchcock's 'signature' on the film, they are unmistakeably 'Hitchcockian'. However, it's the performances in the film, with McCrea's brashness and Sanders' suaveness, and even the scene-stealing performance of Edmund Gwenn (Kris Kringle from "Miracle on 34th Street") as a dangerous hitman, that make this film really great. All the espionage is wrapped up with a rousing call to defend the last bastion of liberty as the world pulls inexorably towards self-destruction. Every element of this film is masterfully done, and it is so much more than just a suspense film, the only way it could've lost the academy award in 1941 was to another Hitchcock film released the same year (that being "Rebecca"). If I had one complaint, it's that Alfred Newman's film score doesn't always jibe with what's taking place onscreen. It's a small complaint for a great film.