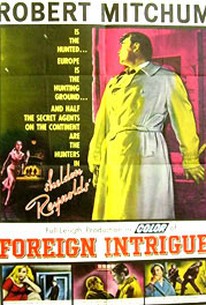 Foreign Intrigue was one of the first major Hollywood films to be based on a popular TV series. Robert Mitchum stars as an American press agent who travels the length and breadth of Europe to learn the past of a recently deceased multimillionaire. After stopovers at the Riviera, Stockholm and Vienna, Mitchum learns that the dead man accumulated his wealth by blackmailing war criminals and Nazi collaborators--all of whom would be happy if Mitchum would disappear, or die, or both. In her first English-language film, Ingrid Thulin (billed as Tulean) plays one of the hero's several amours, as does the toothsome Genevieve Page, likewise making her first American film appearance. After a brief but profitable theatrical release, Foreign Intrigue returned to its roots when producer Sheldon Reynolds sold the picture to TV in 1958.

John Vidborg
as Driver
View All

A delightful find for Mitchum fans, Foreign Intrigue manages to strike a curious tone and the reveal of its central mystery is indeed satisfactory.

A film that is saved from being as generic as it's title by nice location work and Robert Mitchum in the lead. The story is nothing that hasn't been done a thousand times before and since but Mitchum lends a firm center to it and he has a nice give and take with Frederic O'Brady as the man hired to follow him.

(1956 Director: Sheldon Reynolds) A mystery starring Robert Mitchum with some beautiful co-stars! Watching it now on 3.2 ":This" TV review to follow