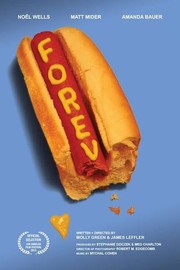 Ryan M
½ July 9, 2014
Sometimes a movie just gets it right. Whether consciously or subconsciously, they just have a grasp on the period of time they are working in. It's not that the story line necessarily has to reinvent the metaphorical wheel, the film just strikes a chord with it's intended audience in a way most can't.

Forev is road trip movie and a romantic comedy, but somehow it is really neither.

Pete (Matt Mider) is a over the phone IT consultant who is desperate for some sort of bond with another person but has trouble finding it. His neighbor, Sophie (Noël Wells, SNL), has had too many bonds and has grown tired of the constant disappointment with both herself and others. They are an odd couple of sorts, who need each other, they just don't know it.

After a rough night, Sophie seeks refuge at Pete's apartment and the conversation jettisons into a half-joking agreement to get married. Pete coerces his new fiancée to travel with him to pick up his sister, Jess (Amanda Bauer), from college and what should be a simple road trip of course isn't. The couple's hours long engagement is dramatically put to the test.

The Writer/Director team of Molly Green and James Leffler seem to have an incredibly deep understanding of the angst facing the millenial generation. My generation. The millenials are in many ways lost and forgotten in the world. We don't have the direction or options our predecessors had and are forced to live in an anxiety driven society of insecurity and uncertainty. We seem to be stuck living in stagnation and desire nothing more than to know what is we are doing with ourselves and where we are going. It has crossed my mind on numerous occasions to do something foolish or ill-advised simply to bring about some kind of change. We attempt to force alterations without foresight because after all, it has to be better than this... right?

Many of us in our 20?s and 30?s can find ourselves in Pete, Sophie, and Amanda. We know the status quo is not changing, so do we sit on our hands and let the world come to us or do we try to find ourselves?

A film like Forev feels like it could be our generation's version of a John Hughes production. It exists because it's needed. Films are rarely this self-aware and for that reason alone it should not be missed.

Meredith A
½ May 15, 2014
I saw this film last year t the LA FIlm Fest and was pleasantly surprised by its charm. The filmmakers are young, smart and incredibly witty and that
energy is present in the film. It's a simple road trip story but the characters demonstrate a friendship that feels wonderfully familiar and complex. Noel Wells, who's now on SNL, is incredible in this. Watching her audition eating a hot dog is quite possibly one of the funniest scenes I've seen all year.

Jibrail F
November 25, 2013
Nice tone. A little confusing for the first 10-15 min as to the nature of the leads relationship prior to the car trip, but after that was relatively smooth in understanding what was going on. Not a huge fan of rom-com but this film was in no-way a typical comedy or romance film. I suppose you could fit this into the mumblecore genre, though not in anyway negative. Much of the comedy comes from the natural if oddball conversations and characters who have them. The funnies are the kind you get when hanging out with friends or interesting people. The scenes in which the characters are serious is also natural and believable, such as Pete's reaction to his missing sister. Was not expecting to be as entertained as I was and very glad I sat an' waited around that park for several hours. We need more love stories like this.
Page 1 of 1