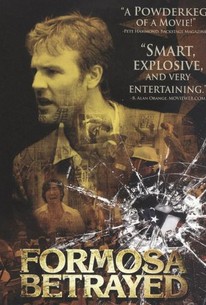 Critics Consensus: Though the real-life drama it was inspired by could certainly form the basis for a worthwhile political action thriller, Formosa Betrayed isn't it.

Critics Consensus: Though the real-life drama it was inspired by could certainly form the basis for a worthwhile political action thriller, Formosa Betrayed isn't it.

Critic Consensus: Though the real-life drama it was inspired by could certainly form the basis for a worthwhile political action thriller, Formosa Betrayed isn't it.

An FBI agent investigating the murder of a Taiwanese-American professor becomes caught up in a vast international conspiracy while aiding the Taiwanese government in catching the killer. The murder took place in the U.S., but in order to investigate, Agent Jake Kelly (James Van Der Beek) will travel to Taiwan. Once there, he is partnered with American diplomat Susan Kane (Wendy Crewson) and Taiwanese official Kuo (Tzi Ma). From the moment Agent Kelly arrives on the island formerly known as Formosa, he is constantly reminded of his status as an outsider. Aided in his investigation by Taiwanese activist Ming (Will Tiao), Agent Kelly gradually uncovers a complex web of intrigue involving not only the Chinese mafia and the U.S. State Department, but the Republic of China as well.

Will Tiao
as Ming

The sturdy political thriller Formosa Betrayed is laudable for adding the voice of native Formosans to the usual two-sided debate that reaches the American media.

It's a passionate labor of love that pointedly criticizes the U.S. government's failure to recognize Taiwan as a sovereign nation, independent of mainland China.

Formosa Betrayed is a history lesson dressed up as an action movie. The lesson is pretty interesting; the movie is just the far-fetched plot it hangs on.

A movie that shows us the desperation and danger of living under martial law in Taiwan during the early '80s, yet somehow never delivers the emotional gut punch the subject matter deserves.

Formosa Betrayed, a ho-hum college history lecture about modern Taiwan awkwardly disguised as a political thriller, has its heart almost in the right place.

Formosa Betrayed works better as a history lesson than as a political thriller.

...a hopelessly uninvolving and thoroughly routine piece of work from start to finish...

As thrillers go, this one is lacking in edge-of-the-seat moments. It just never ignites.

In general, the pacing of the action is sluggish. Moreover, stylistic flourishes are distracting rather than enhancing.

When you hear dialogue like: "So, what do you know about the history of my country?" you know you're in for a whole lot of exposition

Based on a real-life political event, it's à la James Bond flick that's quite passable. While, at times, it evidently got beyond real, that particular aspect at least didn't manage to irritate me as much as it happened to be the case with some other movies of its genre recently. Find that a bit odd because it lacked credible performances.

full of facts and interesting film quite a surprise considering james van der beek's presence. the film is well shot and well acted but the overall story is a little thin. you may get a little confused with all the politics but overall its a passable thriller that is above average

For a documentary, it has good action and moves along VERY well -- I question why the good-looking actors do not shave -- he would've looked soooo much better clean-shaven -- But I loved the movie -- Happy ending

The supposedly true story told in this movie was pretty good, and decently told....... but someone in the course of producing this flick thought it was a good idea to flash-back and flash forward several distracting times. The acting was fine, as was the camera work which helped establish time and place, but it was the editing that made this movie less than it could have been.