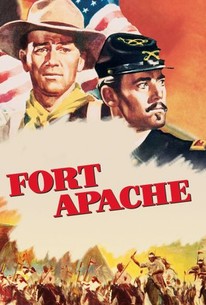 The soldiers at Fort Apache may disagree with the tactics of their glory-seeking new commander. But to a man, they're duty-bound to obey - even when it means almost certain disaster. John Wayne, Henry Fonda and many familiar supporting players from master director John Ford's "stock company" saddle up for the first film in the director's famed cavalry trilogy (She Wore a Yellow Ribbon and Rio Grande are the others). Roughhouse camaraderie, sentimental vignettes of frontier life, massive action sequences staged in Monument Valley - all are part of Fort Apache. So is Ford's exploration of the West's darker side. Themes of justice, heroism and honor that Ford would revisit in later Westerns are given rein in this moving, thought-provoking film that, even as it salutes a legend, gives reasons to question it.

The nonlinear narrative, with its infinite digressions and asides, is designed less to tell a story than to present a world-a world dense in physical detail and fraught with moral challenges.

[Balances] a respect for classic American frontier virtues with a less generous assessment of how those virtues were applied.

Cast is as tremendous as the scope achieved by Ford's direction.

Folks who are looking for action in the oldest tradition of the screen, observed through a genuine artist's camera, will find plenty of it here.

A particularly effective vehicle for Ford's vision of the world's conflicts.

One of the highlights of American cinema.

It's an odd film, consisting more of sidetracks than of an actual story, but it showed a new restlessness in Ford.

One of John Ford's cavalry trilogy, and a near classic on its own. Wayne and Fonda are fine.

The greatest of the "Cavalry" trilogy. Packed with great social commentary and amazing performances by Fonda, Wayne and Ward Bond. Fonda's final scene is one of the most powerful I've seen.

The first part in John Ford's Cavalry Trilogy and it's a complete epic. It's hard to find any mistakes, potholes or dull spots; probably because they don't exist. This is a wonderful story with great characters, messages, and overall outlook concerning the west. Henry Fonda went against his usual personality and plays quite a flawed man, sick with a case of too much pride. John Wayne plays a supporting role in this, but his character is so important to the plot that he completely overshadows everyone else. He might have a fraction of some of the others lines, but he's there when it means something.

I know that many consider Red River or The Searchers to be Wayne's greatest cowboy movies, but for me, you can't get better than Fort Apache. It is the first of John Ford and John Wayne's cavalry trilogy and is the best of the lot. I think the most interesting thing about the film is its rather sympathetic view of the American Indians--they were shown as being decent and 3-dimensional and Wayne repeatedly stressed the importance of our country keeping its word of honor to them as well. In fact, it was very funny seeing Wayne portraying the voice of reason while Henry Fonda was more of a martinet and could have cared less about honor and truth. Along the way, these two great actors are supported by old familiars like Victor McLaglen and Ward Bond, as well as Shirley Temple and her then husband, John Agar. Despite criticism leveled towards Agar by the media over the years (and to a lesser extent, to the adult Temple), I think they did just fine in their roles and made a positive contribution to the movie. And finally, the action and cinematography is tops. It's hard to imagine a more beautiful black and white film or one where so much care and effort was given to make a great film.

One of John Ford's classic tales of the US cavalry, Fort Apache flies in the face of the established stereotypical western and portrays Cochise as an intelligent and honourable man acting for the good of his people. Henry Fonda who we are far more used to playing heroic, sympathetic roles is the cavalry officer ordered to bring him back to the reservation whose arrogance and lack of understanding of or respect for the Apache leads to disaster. For the first half of the film, I thought "Fort Squaredance" would be a far more appropriate name as it is a full hour before an Apache is to be seen. These horse soldiers seem to spend much more time drinking and dancing than riding and fighting! The opening of the film is typical of Ford's dewy eyed romanticism of the old west featuring the usual mix of likable, hard drinking rabble-rousing soldiers, slapstick comedy and naive romanticism set to epic western landscapes. Things get far more interesting as the Indian nation reveals itself and Ford pulls no punches showing the folly of the US government's handling of the situation. John Wayne was always best when working with Ford and this is one of his best roles and Fonda's casting against type works really well. It's a shame the build up is so long winded because when it finally gets going it's brilliant. If you can stomach an hour of old fashioned romantic comedy, the climax is well worth the effort.