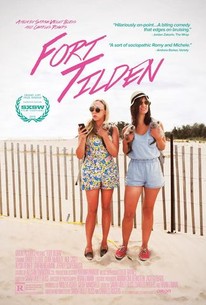 Critics Consensus: Difficult to watch but ultimately all the more rewarding for it, Fort Tilden offers an intriguing calling card for writer-directors Sarah-Violet Bliss and Charles Rogers.

Critics Consensus: Difficult to watch but ultimately all the more rewarding for it, Fort Tilden offers an intriguing calling card for writer-directors Sarah-Violet Bliss and Charles Rogers.

Critic Consensus: Difficult to watch but ultimately all the more rewarding for it, Fort Tilden offers an intriguing calling card for writer-directors Sarah-Violet Bliss and Charles Rogers.

A comedy about Allie and Harper and their needlessly difficult journey to the beach. Fort Tilden: New York City's secluded seaside nirvana where, like flies to honey, Brooklyn's hip millennial set flocks on sweltering weekend afternoons for unbridled summertime indulgence. Amidst the vexing stagnation of quarter-life crises, Allie (Clare McNulty) struggles to prepare for the Peace Corps, while Harper (Bridey Elliot) awaits checks from her father to fund her artistic dreams. But the two friends quickly shun responsibilities for the day when a pair of good-looking guys invites them along for a carefree Fort Tilden afternoon. As the two young women board their fixed-gear bicycles and embark on a lengthy journey to the beach, they quickly realize that, akin to their confusing, transitioning lives, they neither know where they're going nor how they plan to get there. The debut feature film of directors Sarah-Violet Bliss and Charles Rogers - and showcasing the comedic versatility of Clare McNulty and Bridey Elliott as Allie and Harper - "Fort Tilden" is a hilariously insightful and recognizable look at the consequences of extended adolescence.(c) Official site

Becky Yamamoto
as Amanda
View All

Fort Tilden is all the hipster satire you can handle, and maybe more.

Tucked in among the longueurs are moments of savage satirical virtuosity that pinion the zeitgeist.

A story with a distinctive New York sensibility, filled with all kinds of strange urban creatures who are variously self-involved, superficial, rude and/or downright nasty.

With "Fort Tilden," writer-directors Sarah-Violet Bliss and Charles Rogers have created two women who are drawn so vividly and so viciously, they're hard to dismiss.

"Fort Tilden" is cringe-worthy but true. Maybe that's why it's so uncomfortable to watch.

Rarely has a movie so humorously illustrated the meaning of "frenemy."

What begins in the shallow end of the story pool ends in the deep end, showing empathy for characters who, themselves, have little of that virtue.

The simplicity and relatability of the premise allows the comedy to take center stage, with Clare McNulty and Bridey Elliot perfectly executing their Brooklynite alter egos.

The existential crises of the young, privileged, bored, white, female, and loathsome are blisteringly sent up in this freakin' hilarious, stubbornly unsentimental, NYC-set comedy

The film may make a great case why the shouting man might not be wrong, but it also suggests these kids are alright.

A movie that turns a trip to the beach into a cruel metaphor about maturity without losing its sense of humor. [Full review in Spanish]

[An] unpleasant, unfunny experience with nothing fresh or insightful to say.

There are no featured audience reviews yet. Click the link below to see what others say about Fort Tilden!