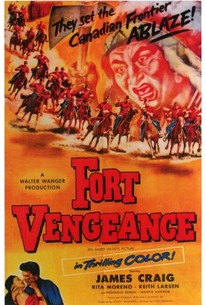 Fort Vengeance starts out as a western and ends up as a "northern." Trouble-making brothers Dick (James Craig) and Carey (Keith Larsen) skeedaddle to Canada when things get too hot for them in the states. The brothers join the Royal Canadian Mounties, where their knowledge of Indian activities make them invaluable. But Carey's recklessness causes the Blackfeet Indians to almost go on the warpath--and also leads to Carey's becoming a reluctant murderer. To prevent a massacre, the heartbroken Dick must track down his own brother. The film's climax is both downbeat and upbeat, depending upon one's point of view. ~ Hal Erickson, Rovi

Emory Parnell
as Fitzgibbon
View All

There are no critic reviews yet for Fort Vengeance. Keep checking Rotten Tomatoes for updates!

There are no featured audience reviews yet. Click the link below to see what others say about Fort Vengeance!