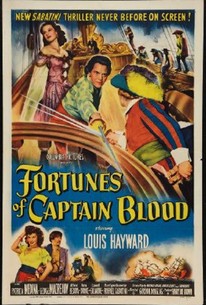 Though usually associated with westerns, Columbia producer Harry Joe Brown proved to be up to the challenge of producing a satisfactory swashbuckler with Fortunes of Captain Blood. Based loosely on the same Rafael Sabatini novel which served as the inspiration for the 1935 Errol Flynn vehicle Captain Blood, the film stars Louis Hayward as Irish doctor Peter Blood, who is exiled from England after treating the wounds of an enemy to the crown. Blood and several other outcasts turn to piracy, terrorizing merchant vessels of all nationalities. Dogging Captain Blood's trail is the heavy of the piece, the Marquis de Riconete (George Macready). Also appearing are Patricia Medina (Columbia's stock costume-drama heroine) as the marquis' niece, and Alfonso Bedoya (immortalized as the Mexican bandit Gold Hat in Treasure of the Sierra Madre) as a sadistic prison overseer. The battle scenes in Fortunes of Captain Blood would be cannibalized time and again over the next few years by quickie-flick producer Sam Katzman.

Harry Cording
as Will Ward

Georges Renavent
as Count
View All

There are no critic reviews yet for Fortunes of Captain Blood. Keep checking Rotten Tomatoes for updates!

There are no featured reviews for Fortunes of Captain Blood at this time.