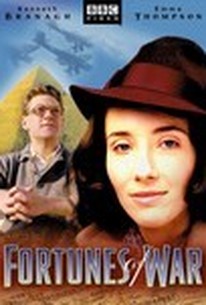 Originally produced for the BBC, the seven-part Fortunes of War was adapted from Olivia Manning's "The Balkan Trilogy" and "The Levant Trilogy". Kenneth Branagh and Emma Thompson, who in 1987 were husband and wife, star as Guy and Harriet Pringle, a British couple who move to Rumania in 1939. As the war clouds gather, Guy becomes involved in political resistance activities, which tends to make him neglectful of Harriet, who'd just as soon remain aloof from world events. While Guy goes off on such missions as destroying the German supply lines along the Danube, Harriet attempts to maintain decorum in her home-a task rendered well nigh impossible when such "guests" as Prince Yakimov (Ronald Pickup) drop in. Separated in mid-war, the Pringles are reunited in Greece, where the lonely Harriet becomes involved with handsome army officer Jeremy Brudenell. Then it's off to further adventures in Alexandria, Cairo, and finally, Damascus. Fortunes of War was first telecast in America from January 17 to February 28, 1988, as part of PBS' Masterpiece Theatre series. ~ Hal Erickson, Rovi

Critic Reviews for Fortunes of War

There are no critic reviews yet for Fortunes of War. Keep checking Rotten Tomatoes for updates!

Audience Reviews for Fortunes of War