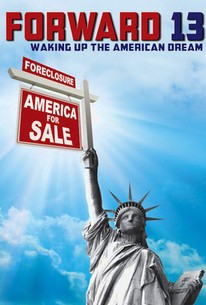 In 2008, the wheels feel off the global economy effectively wiping out Patrick Lovell's American Dream just as it was coming to fruition. As a result, Lovell was swept up in an economic avalanche that nearly destroyed everything he'd been building for the previous decade. Like millions upon millions of American's, his world was turned upside-down and it would take everything he had to survive and keep his family intact. Several years later, he miraculously manifested the opportunity to go on a journey in an attempt to find out what happened to the American Dream. His timing just so happened to coincide when thousands of American's poured out into the streets asking the same question. As the journey unfolds, its revealed that America no longer functions as a democracy, that capitalism is an inside rigged con, and the American Dream is effectively dead. Like millions of others, Lovell is now faced with the perplexing dilemma of what can be done to turn it all around.

Critic Reviews for Forward 13: Waking Up the American Dream

As non-fiction filmmaking goes, this work is a complete disaster.

really a scattershot documentary going for breadth rather than depth in economic issues.

There are no featured reviews for Forward 13: Waking Up the American Dream at this time.