Four Adventures of Reinette and Mirabelle (1987) 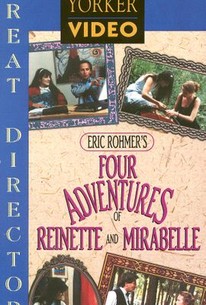 This episodic film comes from French director Eric Rohmer and is the seventh and final installment in the filmmaker's Comedies and Proverbs cycle. Reinette (Joëlle Miquel) is as innocent as a newborn babe, while Mirabelle (Jessica Forde) is as worldly and sophisticated as Reinette is not. Their country mouse/city mouse friendship begins when they share a room in Paris and endures through a quartet of whimsical experiences. Completed in 1987, Four Adventures of Reinette and Mirabelle was distributed in the U.S. in 1989.

Critic Reviews for Four Adventures of Reinette and Mirabelle

Four Adventures is considered neither part of the female friendship canon nor a major Rohmer, but it should be included in both.

Four Adventures uses a country-mouse-and-city-mouse template to explore the morality, aesthetic sense, urban and rural savvy, and a host of other concerns.

You're reminded how much Rohmer valued the sound of others' voices above all, and why going out on a whimper occasionally works wonders.

The deep lure of his work is the suggestion that it is possible to be as articulate or as witty or even as extravagantly morose as a Rohmer character, to stumble across those undramatic moments of perfect grace on some beach or in some meadow.

Four Adventures of Reinette and Mirabelle is vintage Eric Rohmer, a summery slice of life shot through with light and rife with the chatter of articulate nymphs.

Deliberately light and nonambitious (very little of consequence occurs in any of the tales), this nevertheless shows the filmmaker at nearly peak form.

One of Eric Rohmer's most enchanting movies, this episodic seriocomedy is a delightfully well-observed look at a city girl-country girl friendship that transcends movie stereotypes and clichés.

Audience Reviews for Four Adventures of Reinette and Mirabelle

Light as "Rendez-vous in Paris" but with a deeper (and always honest) eye on day-by-day life.