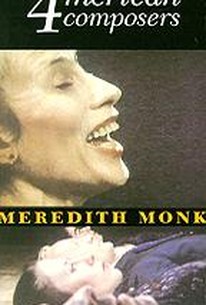 It makes sense that an offbeat director such as Peter Greenaway (The Cook, The Thief, His Wife & Her Lover, Prospero's Books) would be attracted to a project such as 4 American Composers, a 1983 British television special profiling John Cage, Meredith Monk, Philip Glass, and Robert Ashley, four U.S. musical artists who haven't been content simply to entertain, but feel compelled to "push the envelope" of music. This episode chronicles the career of the award-winning Meredith Monk, a composer and singer who also works in film and dance. Monk is the fourth generation in her family to become a singer, and pioneered "extended vocal technique." Greenaway here provides viewers with performance sequences from Monk's multimedia pieces "Dolman Music," "Travelling," "Ellis Island," and others. ~ Steve Blackburn, Rovi

There are no critic reviews yet for Four American Composers - Meredith Monk. Keep checking Rotten Tomatoes for updates!

There are no featured reviews for Four American Composers - Meredith Monk at this time.