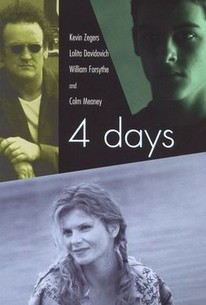 Devoted father and two-bit hood Milt (William Forsythe) plans an interesting father-son activity: a bank heist. The plan hinges on double crossing his long-time partner in crime Fury (Colm Meaney) and Milt's son (known simply as The Kid) fleeing with the cash to a rendevez point up north. After the heist, the Kid wanders about waiting for his dad for four days, not realizing that pops had been shot during his getaway. Meanwhile, the enraged Fury along with Milt's ex-girlfriend Feather (Anne-Marie Cadieux) are hot on the Kid's trail. On the road, the Kid stumbles upon Crystal (Lolita Davidovich), a free-spirited live wire hell-bent on angering her jealous husband. Crystal flirts with the lad, convincing her hubby that she has hooked herself a strapping young beau. Everyone's paths collide at the Paradise Lodge, off in the northern woods. This film was screened at the 1999 Toronto Film Festival.

Kevin Zegers
as The Kid

There are no critic reviews yet for Four Days. Keep checking Rotten Tomatoes for updates!

There are no featured reviews for Four Days at this time.