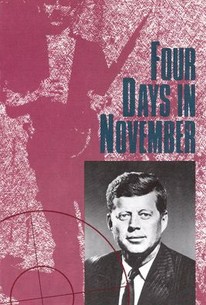 David Wolper's crack documentary staff, under the guidance of talented Wolper protege Mel Stuart, was responsible for the powerful, poignant Four Days in November. This filmed record of the November 1963 assassination of John F. Kennedy and its aftermath was the yardstick by which future documentaries on the subject would be measured. Most of the film is taken from kinescopes of the live TV coverage, including the devastating moment in which Jack Ruby pumped a bullet into suspected assassin Lee Harvey Oswald. Many of the conspiracy theories which latter-day pundits like Oliver Stone have adopted as their own are explored here, and most, wisely, are rejected out of hand. Perhaps the most moving (and least familiar) sequence is lifted from a broadcast of the British satirical TV series That Was the Week That Was, wherein such comic actors as David Frost and Roy Kinnear are seen soberly discussing what JFK meant to them. Despite its not being "state of the art", the black-and-white Four Days of November remains a standard attraction on the many historical TV cable services now in existence.

There are no critic reviews yet for Four Days in November. Keep checking Rotten Tomatoes for updates!

There are no featured audience reviews yet. Click the link below to see what others say about Four Days in November!