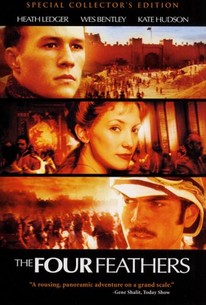 Critics Consensus: Though beautiful to look at, The Four Feathers lacks epic excitement and suffers from an ambivalent viewpoint.

Critics Consensus: Though beautiful to look at, The Four Feathers lacks epic excitement and suffers from an ambivalent viewpoint.

Critic Consensus: Though beautiful to look at, The Four Feathers lacks epic excitement and suffers from an ambivalent viewpoint.

The story, set in 1898, follows a British officer who resigns his post when he learns of his regiment's plans to ship out to the Sudan for the conflict with the Mahdi. His friends and fiancee send him four white feathers, which symbolize cowardice. To redeem his honor he disguises himself as an Arab and secretly saves the lives of those who branded him a coward.

A decent film with some intense battle violence.

Kapur weighs down the tale with bogus profundities.

Ledger does a great job in the action sequences and the more tender scenes.

Offers too small a dose of the blood-and-sand adventure you expect from this sort of big-budget Hollywood remake.

Shekhar Kapur stages the pageantry very well, from the scenes of red-coated officers swirling their ladies around the dance floor to the marches, battles, and prison scenes.

It's a pretty compelling yarn, not to mention full of pretty pictures, and yet it could be so much more than that.

The Sahara desert, gorgeously photographed by Robert Richardson, displays the most personality in the entire picture.

Michael Schiffe and Hossein Amini's screenplay adaptation (is) as full of holes as the tracks of a camel herd. [published 9-19-02]

Ultimately, The Four Feathers is nothing more than a handsomely mounted escapist action flick.

This unique tale of heroic redemption, sacrifice and unlikely comrades-in-arms is fascinating.

Audience Reviews for The Four Feathers

Don't care what anyone else says. This is my second-favorite Heath Ledger film (second only to Brokeback Mountain). And Wes Bentley -- for all his personal problems -- is FRICKIN' HAWT in this film. (Wes -- hit me up on Flixster if you wanna date, m'kay?) Costumes and location magic? Holla!

Barring the lame and predictable love story, this movie was pretty great. Unique plot, as well as the always super badass Djimon Hounsou. In this one he plays a desert comando covered in white powder with neato hair and decor. In fact, I wish he had been the main focus. But alas, Heath Ledger was ok as well, as was Wes Bentley (once he had his cool scar makeup anyways). And Michael Sheen has yet to be in a bad role.

I've actually always found this to be a good movie. Even though it is constantly bashed by critics, I think it's a beautiful story. It's not perfect, but it's not bad by any means. The acting was good and the scope of the film was as broad as an epic.

I tried so hard to keep awake on this Movie. What a shame great casting but very poor film.