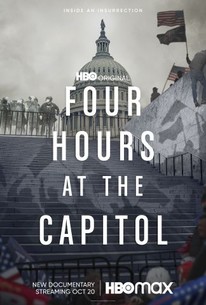 Critics Consensus: While Four Hours at the Capitol may not provide the most cogent thesis on the January 6 attack, it provides a thorough and visceral record of that infamous day's events.

Critics Consensus: While Four Hours at the Capitol may not provide the most cogent thesis on the January 6 attack, it provides a thorough and visceral record of that infamous day's events.

Critic Consensus: While Four Hours at the Capitol may not provide the most cogent thesis on the January 6 attack, it provides a thorough and visceral record of that infamous day's events.

Documentary filmmaker Jamie Roberts sheds new light on the political unrest fomented by extreme far right ideologies that spurred thousands of citizens from across the United States to descend upon Washington D.C. and invade the White House. Protesting the selection of Joe Biden as the 46th President of the United States, the insurrectionists stormed the American Capitol building, putting countless politicians in harm's way in their violent and misguided attempt to thwart the certification of Biden's office.

Adam Kinzinger
as Self - Illinois Congressman

James McGovern
as Self - Massachusetts Congressman

Nancy Pelosi
as Self - Speaker of the House

Mike Pence
as Self

Donald Trump
as Self - Former U.S. President
View All

Critic Reviews for Four Hours at the Capitol

The underlying collective testimony furnished by Four Hours at the Capitol is that the age of Trump has not yet ended - and the true day of reckoning in the United States is still to come.

A powerful documentary that takes no sides...

Four Hours lets its subjects speak without interjection or correction, a decision that seems to respect its audience's ability to reason out the logical gaps.

A documentary that doesn't have the stomach to tell the story of what happened on Jan. 6 explicitly, and to express the real threat to American democracy that that day represents, is of no use to anybody.

One can hardly refer to a collection of such potent footage as uninteresting, but its assembly here leaves much to be desired.

What happened on January 6, 2021 is an event that should never have happened.

Vivid and meticulous, Four Hours emerges as a cautionary tale about the might of the mob, with a pathetic sidebar of teargas-stained Maga hats kept as souvenirs.

Definitely the horror movie of the month, if not the year...

As right wing gaslighters increasingly pretend the attempted insurrection of Jan. 6 didn't happen, wasn't as bad as the media says, or isn't worth Steve Bannon's time to testify about, it's helpful to see the full fury of the day in the new documentary.

Even if you think you know what happened that day, this superb documentary will show you that you had no idea how close we all came to losing a core part of what the country allegedly stands for.

There's no filler here, just the facts from both sides of the divide.

Anne Brodie
What She Said
View All Critic Reviews (19)

There are no featured reviews for Four Hours at the Capitol at this time.

Four Hours at the Capitol Quotes