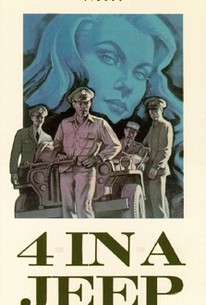 It's a lucky thing that Four in a Jeep was bankrolled by a Swiss production company; if ever a movie needed a neutral approach, this is the one. The scene is postwar Vienna, a city sliced up into four United Nations sectors. Viveca Lindfors, a recent escapee from a Soviet prison camp, tries to win freedom for her husband. American MP Ralph Meeker attempts to help Lindfors, and to avoid falling in love with her himself. Filmed on location, Four in a Jeep was released in the US by United Artists.

Geraldine Katt
as Steffi
View All

Critic Reviews for Four in a Jeep

... the anti-Third Man portrait of the post-war world, where the four powers (American, French, British and Russian) really can get along.

Audience Reviews for Four in a Jeep

Not A Bad Little Movie, produce by a film company outside the United States, I obtained my DVD from VCI Entertainment, the Uncut European version, the DVD I have is of poor sound quality and near the end poor film quality. After the war four armies provide soldiers to patrol Austria. A jeep carrying four men are called to an apartment for a disturbance, The four men are from Russia, France, Britain and the United States, answering the call they find 2 Russian KGB questioning a women, the American falls for her so begins a good story 4 stars

Four in a Jeep Quotes