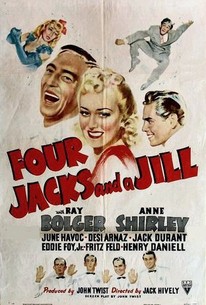 Four Jacks and a Jill Photos

This quickie RKO musical is the second retread of Street Girl (1929); the 1937 musical That Girl from Paris was the first remake. This time around, the four jacks are musicians Nifty (Ray Bolger), Happy (Eddie Foy Jr.), Nat (Jack Briggs), and Eddie (William Blees). Their singer Opal (June Havoc) quits the band because her mobster boyfriend The Noodle (Jack Durant) is pressuring her to pay more attention to him. Nifty discovers the down-on-her-luck Nine (Anne Shirley) and persuades her to masquerade as a celebrated foreign singing star. Farcical complications result -- including cab driver Steve (Desi Arnaz) posing as Balkan nobility! -- as the musicians and their new girl singer pursue fame and fortune. Songs include "You Go Your Way And I'll Go Crazy" and {"Boogie Woogie Conga"}. ~ Nicole Gagne, Rovi

Jack Durant
as The Noodle

Critic Reviews for Four Jacks and a Jill

There are no critic reviews yet for Four Jacks and a Jill. Keep checking Rotten Tomatoes for updates!

Audience Reviews for Four Jacks and a Jill

There are no featured audience reviews yet. Click the link below to see what others say about Four Jacks and a Jill!

Four Jacks and a Jill Quotes