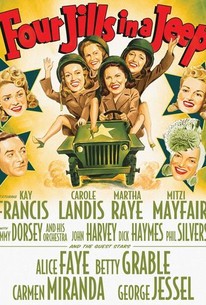 Four Jills in a Jeep is the (mostly) true story of a four-girl USO team, entertaining American troops overseas. Kay Francis, Martha Raye, Carole Landis and Mitzi Mayfair play "themselves," recreating their recent whirlwind tour of Europe and North Africa. This wisp of a plot takes a back seat to the musical numbers performed by the four stars, by Dick Haymes in his screen debut as a singing GI, and by guest stars Alice Faye, Betty Grable and Carmen Miranda. Phil Silvers, George Jessel, and Jimmy Dorsey and his orchestra also pop up to do their usual. Very much a time capsule of the War years, Four Jills in a Jeep was later adapted into a best-selling book, ostensibly written by costar Carole Landis.

Carole Landis
as Herself

Kay Francis
as Herself

Martha Raye
as Herself

Mitzi Mayfair
as Herself

George Jessel
as Master of Ceremonies

David Essex
as Navigator
View All

Critic Reviews for Four Jills in a Jeep

While it's an overly-cleaned-up reworking of the truth, Jills is also fine entertainment... A lovely testament to the hard work of the USO.

Audience Reviews for Four Jills in a Jeep

There are no featured audience reviews yet. Click the link below to see what others say about Four Jills in a Jeep!

Four Jills in a Jeep Quotes