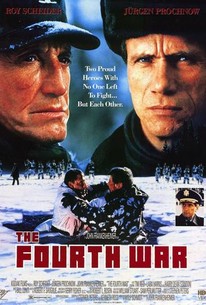 The Fourth War finds director John Frankenheimer delving into the same Cold-war territory he'd previously cultivated in films like The Manchurian Candidate. Col. Jack Knowles (Roy Scheider), serving at a faraway post on the German-Czech border, carries on a personal war with his Soviet counterpart, Colonel Valachev (Jurgen Prochnow). Both have been hardened by past combat experiences, and both have been embittered by the exigencies of red tape, bureaucracy, and diplomatic deal-making. Their friendly rivalry snowballs (literally so!) into a guerilla-like combat situation, culminating in a one-on-one showdown. It's essentially a shaggy dog story, but a compelling one. Based on a novel by Stephen Peters, The Fourth War was given surprisingly short shrift by Cannon Films' distribution channels.

Gregory A. Gale
as Communications Corporal

Kent McNeill
as US Private

Boris Novogrudsky
as Aide to Valachev

Kurt Darmohray
as Villager #2
View All

Critic Reviews for The Fourth War

The Fourth War is essentially a psychological study of a man coming apart at the hinges.

Scheider is much better then the material.

Audience Reviews for The Fourth War

There are no featured audience reviews yet. Click the link below to see what others say about The Fourth War!