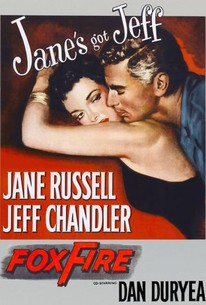 For full appreciation of the culture-clash drama Foxfire, it is crucial that the viewer accept Jeff Chandler as a Native American--not much of a stretch, since he'd previously been thoroughly convincing as Cochise in Broken Arrow. Chandler plays Jonathan Dartland, a half-breed Apache mining engineer working in his native Arizona. On a whim, Eastern socialite Amanda (Jane Russell) marries Jonathan. Disdaining "society", Dartland insists that the flighty Amanda remain in Arizona as a "typical" housewife. The rest of the film deals with the problematic period of adjustment for the seemingly mismatched couple. Foxfire earned a footnote in history as the film which was being screened on the Andrea Doria on the day that the ill-fated luxury liner went down. ~ Hal Erickson, Rovi

At the same time, unfortunately, the lack of actual Native American actors amongst the cast succeeds in sinking whatever good will the film once retained.

There are no featured reviews for Foxfire at this time.