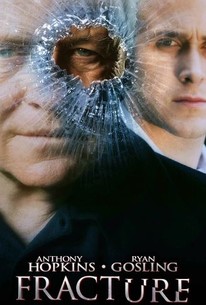 Critics Consensus: Though Fracture's plot is somewhat implausible, the onscreen face-off between Gosling and Hopkins overshadows any faults.

Critics Consensus: Though Fracture's plot is somewhat implausible, the onscreen face-off between Gosling and Hopkins overshadows any faults.

Critic Consensus: Though Fracture's plot is somewhat implausible, the onscreen face-off between Gosling and Hopkins overshadows any faults.

When Ted Crawford discovers that his beautiful younger wife, Jennifer, is having an affair, he plans her murder--the perfect murder. Among the cops arriving at the crime scene is hostage negotiator Detective Rob Nunally, the only officer permitted entry to the house. Surprisingly, Crawford readily admits to shooting his wife, but Nunally is too stunned to pay close attention when he recognizes his lover, whose true identity he never knew, lying on the floor in a pool of blood. Although Jennifer was shot at point blank range, Nunally realizes she isn't dead. Crawford is immediately arrested and arraigned after confessing--a seemingly slam-dunk case for hot shot assistant district attorney Willy Beachum, who has one foot out the door of the District Attorney's office on his way to a lucrative job in high-stakes corporate law. But nothing is as simple as it seems, including this case. Will the lure of power and a love affair with a sexy, ambitious attorney at his new firm overpower Willy's fierce drive to win, or worse, quash his code of ethics? In a tense duel of intellect and strategy, Crawford and Willy both learn that a "fracture" can be found in every ostensibly perfect facade.

Yorgo Constantine
as Public Defender for the Russians

It's straightforward and nongimmicky (you don't have to wonder whodunit because we're told in the first few minutes), involves a minimum of blood and gore, and holds our interest nicely.

Not since Lecter has a role been this well suited to Hopkins, whose intelligence and pristine formality as an actor often make him seem alien.

A smart and snappy thriller that makes light work of its ethical dilemmas, Fracture is a little too neat and tidy to stick in the mind for long, but the Hopkins-Gosling pairing is choice, and neither comes up short.

The two leads are on fine form, but the surrounding structure is too familiar from a thousand other films. Still, tense and occasionally twisty stuff.

Fracture is the kind of polished cat-and-mouse movie thriller that depends entirely on the cat and the mouse having read and agreed to the script in advance.

You've got to expect comparisons to Silence of the Lambs. The verdict: for me at least Fracture isn't even a fraction as good.

If you're up for a cerebral thriller, Fracture smartly alludes to story beats from the OJ Simpson case. It gives us an unlikely hero...

Anthony Hopkins and Ryan Gosling go at each other with so much gusto that their performances bring a lot of fun to material that is actually quite preposterous if you stop and think about it.

The villain is more interesting than the hero, but Fracture functions well enough as a fun piece of puzzle-solving.

Doesn't hold up to a lick of scrutiny, which is a shame, since it provides such juicy material for a pair of contrasting actors...

An intriguing thriller that holds our attention as it relies on the combined talents of Hopkins and Gosling, who are both amazing in their roles, and it is great to see them dueling in this smart mind confrontation, an above-average cat-and-mouse crime film.

Ted (Anthony) is a wealthy businessman who murders his wife in cold blood as she was having an affair. An assistant DA (Ryan) is not his match in court so he gets off scott free even though he made a signed confession. Interesting twists in the movie. Good cast.

Cast: Anthony Hopkins, Ryan Gosling, David Strathairn, Billy Burke, Rosamund Pike, Embeth Davidtz, Larry Sullivan, Fiona Shaw, Xander Berkeley Director: Gregory Hoblit Summary: Anthony Hopkins stars in this legal thriller as Ted Crawford, a man who allegedly attempted to murder his wife and is now locked in a battle of wits with a young assistant district attorney, Willy Beachum (Ryan Gosling). The D.A. is convinced Crawford has blood on his hands, but Crawford is freed on a technicality, sending Beachum on an obsessive mission to prove Crawford's guilt -- even if he has to bend the law to do it. My Thoughts: "This is an intelligent suspense thriller. Hopkins is so good at playing creepy. He's quite clever and devilish in this role. Ryan Gosling was just as great. It takes a good actor to make his presence known when working with a great like Hopkins, and he manages to do just that. Besides the acting, the story is also very strong. Some seen the ending coming, but getting there is a great ride. It's a great film of catch-me-if-you-can, with Gosling trying to solve the "perfect murder". The film pulls you in from the start and never lets go. One of the best suspense/thrillers I have seen."