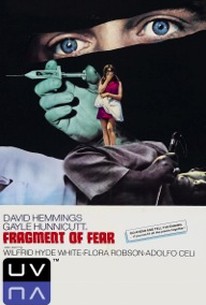 This chilling mystery begins when Lucy Dawson (Flora Robson) is found strangled in her apartment. Her nephew Tim (David Hemmings) is the former-drug-addict-turned-successful-author who wrote a book about his experiences. When Tim looks into his aunt's death, people give sketchy answers and the police offer little help. Apparently they think his pleas are simply a drug-addict's ravings. As he investigates he begins to find himself plagued by threatening phone calls, and his own paranoia. The pressure begins mounting until at last he suffers a complete breakdown. As a result, the murder is never solved. ~ Dan Pavlides, Rovi

Lois Hyett
as Schoolgirl
View All

Critic Reviews for Fragment of Fear

David Hemmings' convincing performance gives this film a creepy mood to hang its hat on.

There are no featured reviews for Fragment of Fear at this time.