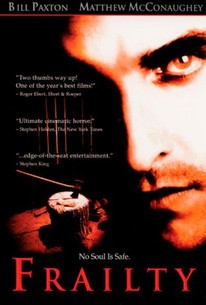 Actor Bill Paxton made his directorial debut with Frailty. The bulk of the story is told through flashbacks, as a mysterious man (Matthew McConaughey) tells a terrible tale to an FBI agent (Powers Boothe) investigating the "God's Hand" serial killer case. The man grew up in a small town in Texas, where he and his brother lived a bucolic life with their kindhearted widower father (Paxton). One night, the father awakens the two boys, Fenton (Matthew O'Leary) and Adam (Jeremy Sumpter), and tells them he's had a vision, and God has chosen him and his sons to help Him slay demons who walk the earth in human form. He tells the boys they can never tell anyone about this task. Before long, he comes home from work with a list of names that he claims an angel has given to him. He then begins abducting people, bringing them home, one by one, and having the boys watch while he lays his hands on them. After having proven, to his mind, that they are demons and not human, he chops them up with an axe while the boys look on. Young Adam is eager to participate, seeing his family as "kind of like superheroes," while the older Fenton is distraught, believing that his father has lost his mind. He contemplates running away, but is reluctant to leave his little brother behind. Eventually, he goes to the authorities, which results in disaster. As he tells the story, McConaughey takes Boothe out to the public rose garden near his old home, where he claims his brother, the "God's Hand" killer, buried the bodies. Paxton dramatizes the mayhem while leaving almost all of the gore offscreen, and Brent Hanley's script leaves the true motives of several characters unclear until the very end. ~ Josh Ralske, Rovi

Edmond Scott Ratliff
as The Angel

Edgar Davis
as FBI Agent No. 2

Greg Serano
as FBI Agent No. 1

Jim Flowers
as FBI Agent No. 3

Richard A. Bell
as Curtis

Paxton steals the show. And O'Leary more than holds his own again here. Too bad it's in a movie that fails to live up to its potential.

Violent and ultimately uneven and unsatisfying.

A resoundingly old-fashioned and well crafted study of evil infecting an American family, "Frailty" moves from strength to strength on its deceptive narrative course.

Paxton's first movie as director is better than you might expect. It has a first rate cast, and Bill Butler's camerawork and some deft editing help to crank up the tension.

Paxton not only directs but acts, so there was a double threat. But he does both with so much commitment that the film is a revelation.

Actor Bill Paxton's assured directorial debut feels like you're sitting around a campfire in the deep woods, listening to a master raconteur spin an urban legend...

Grim, but effective, Paxton's debut is authentically creepy. An enduring and inventive vision of horror.

Frailty is an absolute gem.

... marvelously off-balance and under-the-skin creepy from the first few minutes.

Frailty is disturbing, all right, but then so is sticking needles in your eyes. And I wouldn't recommend either.

Bill Paxton and the guy from those lincoln car commercials? What an incredible duo. Hard not to feel blessed seeing 2 titans on the industry doing what they do best

A man walks into the offices of the FBI and declares that he knows the identity of a high profile serial killer, and sets about convincing the sceptical agent in charge by recounting the events of his life. Until Matthew McConaghey's recent catharsis as to the quality of the projects he becomes involved with, his career was littered with turds but this is far from the worst offender. It's a supernatural thriller in which the childhood victim of a murderous religious zealot tells of how the life of his younger brother and he were turned upside down by their father's "holy mission" which sets the scene for an intriguing story. McConaghey makes a suitably intense and enigmatic lead and his verbal sparring with disbelieving Powers Boothe works well. Unfortunately Bill Paxton's inexperience behind the lens means the pacing is long-winded rather than atmospheric and there are a few instances where the film looks plain amateurish. But the biggest problem is its reliance on the proverbial and extremely obvious "twist ending" which totally undermines what could've been a powerful statement on how blind faith could cause a good man to commit evil deeds, instead making for a hokey X-File. Still, it's far from Matthew's worst moment and is worth a look if you're looking for an off-beat thriller with a supernatural flavour.

Sloppy B-movie trying to pass as sophisticated horror. Even though its script is seriously bad and repetitive, Frailty does manage to hold your attention. Actor/director Bill Paxton offers a lackluster performance, but Matt O'Leary, Jeremy Sumpter and Matthew McConaughey make up for that. The film also features some outstanding camerawork and editing, but ultimately fails due to awful writing.