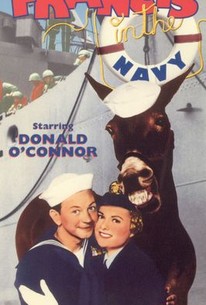 Francis in the Navy Photos

Francis in the Navy was the sixth in Universal's popular movie series about the misadventures of a talking mule. It was also the last "Francis" effort for human star Donald O'Connor, who bailed out reportedly because the mule was getting more fan mail than he was. This time, O'Connor plays a dual role: his usual "Francis" character, the hapless Peter Sterling, and Peter's look-alike, navy war hero Slicker O'Donovan. The inevitable mistaken-identity complications ensue, with Peter taking Slicker's place in uniform. The film builds methodically to a wild (but somehow credible) slapstick finale involving an airborne tank! As ever, Chill Wills supplies the voice of Francis, who functions as last-minute problem solver. In his second film appearance, Clint Eastwood plays a sailor named Jonesy; also on hand are TV-stars-to-be Martin Milner and David Janssen.

Chill Wills
as Francis the Talking Mule
View All

Critic Reviews for Francis in the Navy

There are no critic reviews yet for Francis in the Navy. Keep checking Rotten Tomatoes for updates!

Audience Reviews for Francis in the Navy

There are no featured audience reviews yet. Click the link below to see what others say about Francis in the Navy!

Francis in the Navy Quotes