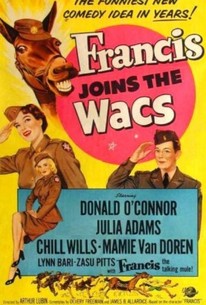 Francis Joins the WACS was the fifth in Universal's comedy series about a talking Army mule and his hapless human companion. Thanks to a bureaucratic snafu, ex-GI Peter Sterling (Donald O'Connor) is called into acitive duty and assigned to a WAC unit, headed by Major Simpson (Lynn Bari). It is Sterling's task to train the women to be camouflage experts, but the ladies resent his presence, assuming that Peter has been sent to discredit their unit. But with the help of Francis, the WACs manage to win the annual War Games, and to flummox misogynistic General Kaye (Chill Wills, who also provides Francis' voice). Julie Adams, then billed as Julia, provides the love interest. ZaSu Pitts also appears in Francois Joins the WACs, recreating the role she'd played in the first Francis installment back in 1949, while other uniformed females include Mamie Van Doren and Allison (Attack of the 50-Foot Woman) Hayes.

There are no critic reviews yet for Francis Joins the WACs. Keep checking Rotten Tomatoes for updates!

There are no featured audience reviews yet. Click the link below to see what others say about Francis Joins the WACs!