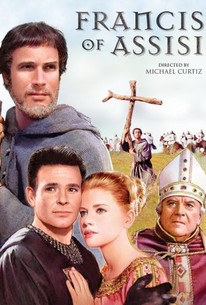 This penultimate film by director Michael Curtiz, perhaps best known for his 1942 Casablanca, is a verbose, routine religious drama on the life of St. Francis of Assisi. After quickly passing over St. Francis' early life as the son of a wealthy cloth merchant in Assisi, the story notes his talents in and out of battle. St. Francis hears the call to the cloth (in his hagiography, the call was repeated several times before he finally responded completely), and gives up all his worldly goods to dedicate himself to God. The main focus of attention is then on his relationship to Clare (Dolores Hart) a young aristocratic woman who was so taken with St. Francis that she left her family and became a nun. St. Francis by this time (1212 A.D.) had a well-established reputation for his vows of poverty, and aside from the dubious aspersions cast on his interest in Clare, the drama goes on to note miracles and other aspects of his life, up to and including his death on October 3, 1226.

Critic Reviews for Francis of Assisi

Michael Curtiz, a man who never met a stationary camera he didn't romance.

Audience Reviews for Francis of Assisi

There are no featured audience reviews yet. Click the link below to see what others say about Francis of Assisi!