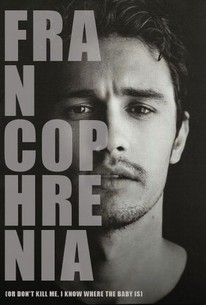 When James Franco took a gig on General Hospital, he brought along a documentary film crew. This film, however, is not a documentary about his time shooting the perennial soap opera, but rather an avant-garde experimental exercise. Franco and co-director Ian Olds use the footage that crew captured, but employ voice-over and a number of different post-production effects in order to create a psychological thriller about an actor named James Franco who is slowly losing his mind while filming a soap opera.

Critic Reviews for Francophrenia (Or Don't Kill Me, I Know Where the Baby Is)

Without perspective, any portrait of an artist risks slipping into a self-referential vortex. That's what happens with Francophrenia...

In '127 Hours,' James Franco hacked away at his arm. During 'Francophrenia,' you might just wish he did the same to his head.

There are no featured reviews for Francophrenia (Or Don't Kill Me, I Know Where the Baby Is) at this time.

Francophrenia (Or Don't Kill Me, I Know Where the Baby Is) Quotes