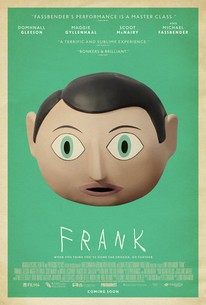 Acclaimed Irish director Lenny Abrahamson follows up his award-winning films Adam & Paul, Garage, and What Richard Did with an offbeat comedy about a young wannabe musician, Jon (Domhnall Gleeson), who finds himself out of his depth when he joins an avant-garde pop band led by the mysterious and enigmatic Frank (Michael Fassbender), a musical genius who hides himself inside a large fake head, and his terrifying bandmate Clara (Maggie Gyllenhaal). (C) magnolia

Lauren Poole
as Alice
View All

Fassbender gives a finely textured performance both in and out of the head.

Beneath those puppet-headed antics, and true to its title, Frank is improbably, disarmingly honest.

Michael Fassbender spends the majority of Lenny Abrahamson's irreverent comedy "Frank" buried underneath a giant plastic head, but the honesty of his performance is on full display.

With the soulful Gleeson and a sweetly menacing Fassbender (under a giant helmet-head) at its center, the movie never loses its acerbic edge or its oversize heart.

Pleasingly and perhaps surprisingly, given the extremities of the material, the cast plays crazy with cool, measured aplomb.

Frank is much more interested in the rough than the diamond and because of that, it remains one of the more refreshing representations of musical genius and the nature of fame in recent memory.

By the end, Frank is not about anything. Definitely not about music. But is it not funny? Tons. Fun to see Fassbender in papier mache? Oh yeah. It's a great, unique, silly comedy.

Not to be outdone by her brother, Maggie Gyllenhaal also has a quirky, tough-to-pin-down film featuring an enigmatic costumed character named Frank. This "Frank" burrows into the artistic conflict between commodifying pain into a persona.

However you find Frank, find him. He'll be the best weird friend you've met in a while.

It begs interesting questions, even if the way it ponders them can only be described as eccentric.

Fassbender should be praised for the intelligent way that he composes a whole fascinating character whose face we can't see, in an insightful film that is so well balanced between comedy and drama, with eccentric characters and an astute understanding of our need to be loved.

Surrounded by believable performances, a great story, and characters that you will not want to look away from, "Frank" is an immersive little indie film that is not easy to resist. Domnhall Gleeson leads this wacky picture, as he is recruited by a band who makes terrible music, as they are in their mindset of making their first album. Going off to a secluded cabin to record, many new group memebers are met. Namely, Frank, a man who refuses to take off this weirdly shaped mask, and the story that unfolds to that story is not all that surprising, but more appreciative. I loved every minute of this film, from it's great cinematography to the fact that the terrible music they played through the film could be passed as decent. Although I think the film ends on an easy note, it is the best way to quietly end the film. This picture is the perfect length for the story it is trying to convey, and it is a very easy watch. I highly recommend "Frank," it's terrific.

Civilization is comprised of little islands of humanity (we call them cliques) and this film takes a look at one such pocket led by a curious individual who hides his persona beneath a paper mache head of some cartoon character. That he is a leader is demonstrated to be less by personal design than by that nobody else wants the job, and therein is the major focus of this curiosity: we deserve the leaders we get. What drives this clique is the desire to create music, and Frank, the emotionally stunted soul at the center, is the jewel through which the group achieves this desire. A commentary on all of our leaders thereby, and on all of us as well.

A fledgling songwriter befriends an EDM/sound effect band led by a disturbed yet brilliant man who is never seen without a papier-mache head on. There's that peculiar Irish humor and that awkward Irish sweetness, but the story moves like a juggernaut without motivation. Because the "music" is so weird yet clearly "genius" in the world of the movie, it's unclear whether Jon's adulation and plans for fame are genuine or sinister (perhaps with the intention of outing the group as a freakshow). Frank's own weirdness or genius also clouds his trust in and encouragement of Jon. Does he truly want fame, or is he just yanking Jon's chain for yuks? If we are to take both these characters at face value, then it's just weak characterization. Jon must have lived under a cyber-rock to believe tens of thousands of views on YouTube is worth a damn, and Frank is much too offbeat an oddball to actually crave outside validation. Then to have his idiosyncracy boiled down to mental illness is just another lazy resolution.