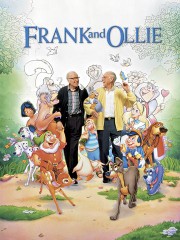 Keaton B
January 24, 2012
Amazing documentary that shows an honest portrayal of a friendship between two of the last-surviving members of Disney's "Nine Old Men". Rest in Peace, Frank (1912-2004) and Ollie (1912-2008). You guys were my favorite animators. Kudos to Frank's son, Theodore, for bringing this friendship to light.

Chris H
July 18, 2011
A loving and insightful glimpse into one of the greatest friendships in the history of animation. It's one thing to read about these guys, but it's another experience entirely to watch them in action.

Everyone who has seen any of the classic Disney animation has seen the work of Frank and Ollie. They worked on the features from [i]Snow White[/i] to [i]The Fox and the Hound[/i]. And of course, When I Was a Child, the Disney Channel would routinely remind us of such. They were still around then; neither has been dead a full decade even now. And When I Was a Child, Disney was a lot more aware of its roots than it seems to be now. For seventy years now, an easy way to show the camaraderie of the golden years at Disney is to show Frank and Ollie goofing around together. Disney didn't form that partnership, merely benefited from it. However, the friendship between Frank and Ollie has been on the silver screen since even before my parents were born, and its last appearance was in 2004, when they essentially played themselves as extras in [i]The Incredibles[/i]. There are still some people who remember the debt those two good friends are owed.

Frank and Ollie are Frank Thomas and Ollie Johnston. They met at Stanford, where they worked together on the humour magazine. They moved on to Chouinard Art Institute in Los Angeles, joining that school's seriously impressive list of alumni. And then, in the '30s, Disney was hiring, and everyone concerned became very lucky indeed. Most of the movie is the two men sharing stories about their days working for Walt and their friendship with each other. And indeed, the friendship really goes without saying through most of the movie, just made clear by the fact that, more than sixty years after they met, they still own houses next door to one another and spend a lot of their time together. As much as anything, this is a first-person account, a pair of them, of one small slice of history. They are full of anecdotes, and they are also delightfully willing to act out some of the scenes they famously drew all those years ago.

Am I overstating things, claiming that this is a slice of American history? Certainly not. Leaving aside what I consider to be an obvious fact that history is made up of everything that happens, it is a simple fact that the twentieth century was shaped by its media. Not necessarily more so than any other century; I think we understate the importance of media on past centuries just because the media which shaped them did not include the media we rely on. However, if you asked probably a majority of people born after 1935, and there are fewer and fewer people left born before then, the first movie they saw in the theatre was probably a Disney movie. For people about my age and younger, we grew up watching the Disney Channel. We all know the signature, the castle, the silhouette. And I'm pretty sure the denigrating adjective "Mickey Mouse" is in the [i]Oxford English Dictionary[/i]. It's also true that the films are a reflection of the culture in which they exist, and that's important, too.

Starting in about the late '40s and early '50s, Walt seems to have essentially turned the feature department over to Frank, Ollie, and the other seven Old Men. He still worked with them, but he was also involved in the televisions hows and the theme parks and various other projects. They had to be self-directed, because Walt wasn't guiding every step anymore. However, it's quite clear that Walt's trust was not mislaid. Frank and Ollie tell stories about deciding how to make [i]Bambi[/i] more interesting or show Baloo's need to "betray" Mowgli by how Baloo moves. If you are at all interested in Disney animation, this film is essential--though I don't think you have to be in order to find the movie worth watching. Indeed, watching it may get you interested in classic Disney animation, despite the fact that it's much more fashionable to denigrate Disney these days. In many ways, the film does the job of reminding you that animation is an artform, and one more complicated than a lot of people realize.

It's soothing to watch this if you have recently watched [i]The Boys[/i]. (It also appears to contradict the statement in there that the partnership will fall apart if the wives socialize; Marie E. Johnston seems to get on just fine with Jeanette A. Thomas.) Frank and Ollie loved each other very much, to the extent that the word is even used once, rare in a discussion of two men who aren't actually brothers. (Being the product of my generation, I'm forcibly reminded of the [i]Wayne's World[/i] "I've learned that platonic love can exist between two grown men!") Frank and Ollie were best friends for longer than a lot of lifetimes. They worked together. In the early days, before they were married, they lived together. After that, they always lived near each other, in the same apartment building or duplex or just next door. They carpooled. They socialized. They took vacations together. And never, in all those years, did they get tired of spending time with one another. Not bad. Not bad at all.

Ian G
February 23, 2011
A moving and insightful doc focusing on the two key figures in Disney Animation who helped bring a lot of the memorable characters to life through what is now a required technique called personality animation, and also delves into their personal lives, their friendships and how after Walt died they helped keep his dream alive starting with his final project that he was involved with the Jungle Book. Real insightful and makes me want to look more into the men behind the man.

Jaret J
January 23, 2011
This movie gave me a lot of information about these two legends and it's in fact one of the beast documentaries done by Disney.

Tristan P
½ November 14, 2010
Very tender documentary about the lives of two men who helped shape the world of animation.

Jonathan S
½ July 16, 2010
A peaceful and magical documentary about two of the greatest animators who were also two amazing friends. No drama, heat, or conflict, just two delightful old men looking back on all the magic they created together from "Snow White" to "The Jungle Book" and beyond. There is a mighty calm and subdued energy about this movie and Frank, Ollie, their wives, dogs, old sketches, and fondness for the piano and trains somehow become incredibly entrancing and the clips of some of their finest emotive Disney animation work is just the sweet icing on the cake.

Dan K
June 14, 2010
The wonderfully charming story of two Old Men. haha A great insight to a couple of the guys that made all the magic that people have grown up to for generations, possible.

Daniel H
May 10, 2010
:fresh: [CENTER]This is a touching friendship of two great animators.[/CENTER]

SV G
April 25, 2010
This sweet documentary is about two major artists at Walt Disney studios for nearly a half century. It covers their artistic collaboration on close to a dozen feature films. Most interesting is they met in college, both worked at Disney their whole life and lived in house right next door to one another.

Patrick F
March 2, 2010
A nice, sweet doc. It lacks a good narrative, but it's still nice to see these "Old Men" talk about their work.

Jason C
August 13, 2009
Surely a must see for anyone who cares about animation and the early years of the Disney studios. This candid journey that takes through these two gentlemen's career will be of great interest to those who are interested. (Luckily Disney's giving it away for FREE through their rewards website).

Cha t
½ December 22, 2008
I waited 2 months ot get this great documentary from Netflix after Ollie died last year. These two guys were at the center of the Disney cartoon brain trust as well as living next door to each other while being best friends. A great piece for Disney and cartoon fans.

Super Reviewer
Dannielle A
½ October 8, 2008
A perceptive glimpse into the lives of two friends who helped create some of the most beloved Disney characters of all time. I fell in love with Frank and Ollie as they introspectively told stories that penetrated my heart. I was awed at the incredible talent that goes into animation and the genius that these two men brought to Disney films. The film is made complete with a sprinkling of clips from Disney movies to show examples of what they're talking about. The best part was when a man said "A verse in Proverbs says 'iron sharpens iron' and that's Frank and Ollie. They sharpen each other."

Jason O
April 11, 2008
Great documentary for anyone interested in Disney animation from the mid 1930's to the 70's. Unfortunately Frank Thomas died a couple of years ago and Ollie is one of our only links left to that era.

Peter C
February 26, 2008
such a great story of what appears to be the most genuine friendship imaginable.

Tristan P
December 18, 2007
Funny and aborbing documentary of animation told through the eyes and lives of two extraordinary animators whose friendship can never be broken.
Page 1 of 2